Lal Masjid - III: ‘We only had arms for our personal defence’

Lal Masjid - III: ‘We only had arms for our personal defence’ 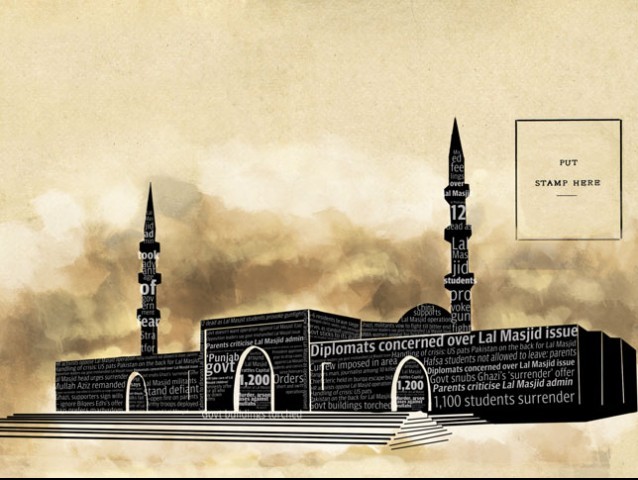 One of the iconic moments of Operation Silence – that managed to further shock a nation glued to continuous coverage of the siege of Lal Masjid – was Maulana Abdul Aziz removing a burqa from his face on national television. He had been caught at the airport escaping in a black burqa, and the Musharraf government had him wear it for his statement.

I ask about the incident. “How did it feel when the government made you do that, give that statement?”

I wonder why he is feigning ignorance, when his wife Umme Hassan clarifies loudly. “She’s asking about when they made you wear a burqa!”

He shrugs and says he is not upset at what happened. Aziz speaks softly, with his glance cast downward. A couple of Kalashnikovs – which look like toy replicas – lie on the windowsill in the cramped room.

While Aziz says he has no regrets, grudges or complaints, he often highlights the problems he is facing. He praises the help of Haji Khokhar and Bahria Town’s Malik Riaz, but says that finances are an issue.

He believes the current government has not done anything to solve Lal Masjid’s issues.

“We will bear this for the sake of our faith. My father, mother and brother were martyred. I have spent time in jail. I have faith in God’s mercy.”

Aziz speaks at length about the state of affairs in Pakistan, mentioning the protests in the Middle East, and how Shariah is a solution. “The conditions and miseries of Pakistan are due to our system. Thousands of tragedies take place every year because of this system. Look at the conditions in Balochistan, in Karachi … tragedy upon tragedy keeps occurring. What happened at Lal Masjid is just one incident.”

“We believe that this country needs Islamic rule. There should be a system of Khilafat. Allah’s Shariat should be imposed. No other law can bring peace to this country.” When it comes to the siege, Aziz recalls, “We were raising our voice peacefully. We made a great deal of effort. It never entered our minds that an operation would take place.”

“Chaudhry Shujaat, Ijazul Haq, all these people … they said ‘the government will not agree to a single demand of yours’,” says Umme Hassan.

Aziz responds to the government’s claims that weapons had been stockpiled in Lal Masjid and Jamia Hafsa. “We did not have any heavy weaponry. We had a few licensed Kalashnikovs for our own security …”

Umme Hassan interjects, “Their family is from Balochistan. It is customary there to have weapons.” She claims that any high-ranking army officers who were killed were because of the army’s own crossfire.

Aziz continues, “I had participated in jihad. We only had arms for our personal defence.”

The government, he says, had claimed that they would compensate those who had suffered in the siege. “Did they give any money?” he questions. “They keep dragging us into lawsuits.”

“People cannot call me,” he says, a tone of regret creeping into his voice. “They question them afterwards of what their links to Lal Masjid are.”

Aziz believes that after the tragedy of Karbala, the siege of Lal Masjid ranks as the biggest tragedy in the history of Islam, and that it brought people closer to their faith. “Islam is the future of the world. The United States is being defeated. Like the Soviet Union, it will also be divided into pieces.”

When asked about the letter sent to the prime minister by Islamabad residents complaining about Jamia Faridia, Aziz says, “We do have our opponents. But we have done no wrong. If we were criminals, why were no cases ever lodged against us in the Aabpara police station? Go to the police station. They will praise Maulana Abdul Rasheed Ghazi and tell you what I am like.”

“It is very easy to write an anonymous letter.”

While he has not made eye contact throughout our conversation, he finally looks up and smiles. “Musharraf cannot come back to this country. But I can go to Lal Masjid and lead the prayers. We are free.”