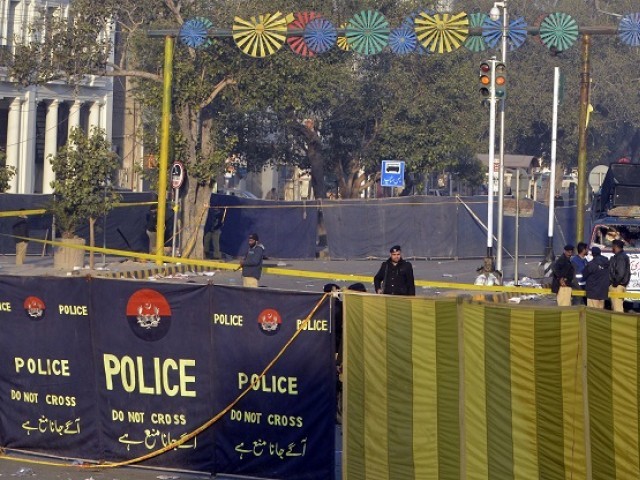 Security officials inspect the site of a suicide bombing in Lahore on February 14, 2017. PHOTO: AFP

LAHORE: Pakistanis on Tuesday mourned the victims of a Taliban-claimed suicide bomb in Lahore, and the city’s residents railed at the government for failing to protect them.

The Punjab Chief Minister Shahbaz Sharif declared a day of mourning after Monday’s blast on Lahore’s Mall Road, one of the city’s main arteries, at rush hour during a busy protest.

At least 13 people were killed, emergency official Ahmad Raza said including six police officers, while up to 87 were injured. The toll could have been much higher, Raza said, but for two vehicles – a TV news van and a minivan belonging to the protesters – which absorbed much of the impact of the blast. 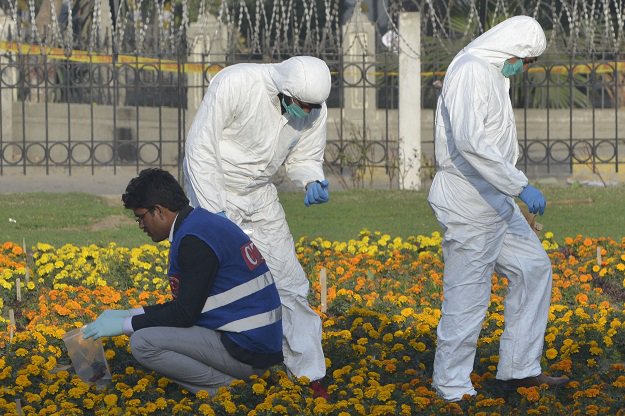 Security officials collect evidence at the site of a suicide bombing in Lahore on February 14, 2017. PHOTO: AFP

A faction of Tehreek-e-Taliban Pakistan (TTP), Jamaatul Ahrar claimed responsibility for the assault, which came three days after it announced it would carry out a series of attacks on government installations around the country. A spokesperson for the group warned in a statement that Monday’s bomb was “just the start”.

The attack underscored the challenges faced by Pakistan in its push to stamp out militancy, even as security dramatically improved in 2015 and 2016. 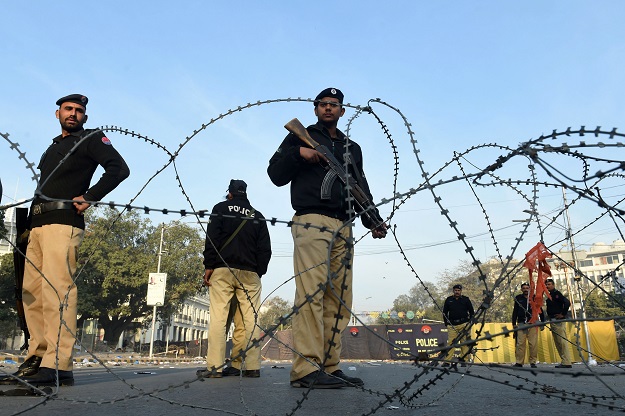 Police cordon off the site of a suicide bombing in Lahore on February 14, 2017. PHOTO: AFP

Local groups like the umbrella TTP retain the ability to carry out spectacular attacks, despite a military led crackdown on militancy.

Cops killed in the line of duty

Lahore residents vented their fury at the militants and the government at the blast site early on Tuesday. “They (the militants) have no link with Islam nor do they believe in any religion, the only thing they know is killing people, this is utterly an act of terrorism,” Tariq Saleem told AFP.

Nadeem Akhter called on the government to do more to bring the situation under control. “Our children and people are being killed in these attacks,” he said. 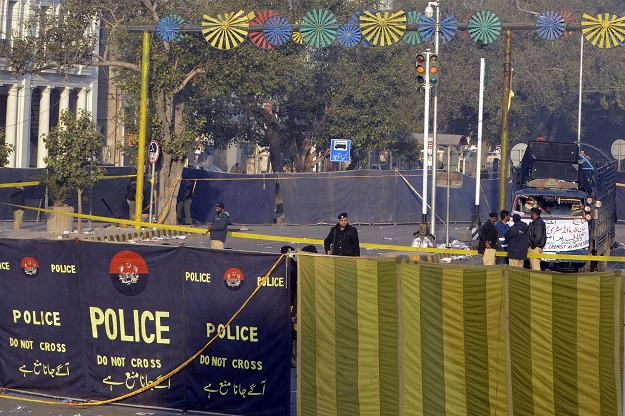 Security officials inspect the site of a suicide bombing in Lahore on February 14, 2017. PHOTO: AFP

Both British High Commissioner to Pakistan Thomas Drew and US ambassador David Hale branded the attack ‘cowardly’ in separate statements, expressing support for the victims.

Lahore, the country’s cultural capital, suffered one of Pakistan’s deadliest attacks during 2016 – a Jamaatul Ahrar suicide bomb in a park last Easter that killed more than 70, including many children. 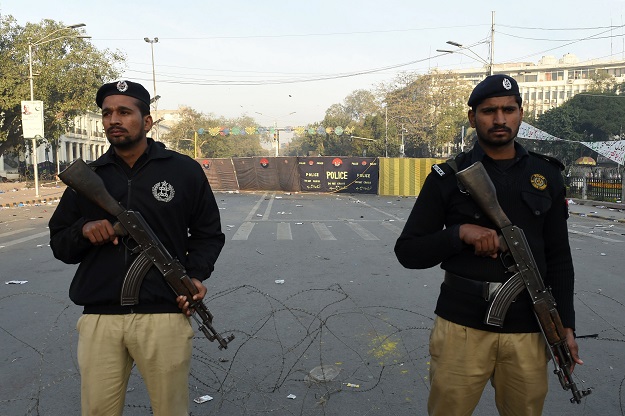 Police stand guard at the site of a suicide bombing in Lahore on February 14, 2017. PHOTO: AFP

But such incidents have been rare in the city in recent years.

Shortly after Monday’s attack two members of a bomb disposal team were killed in Quetta, while trying to defuse a device. It was not clear if the Quetta bomb was linked to the Lahore attack. 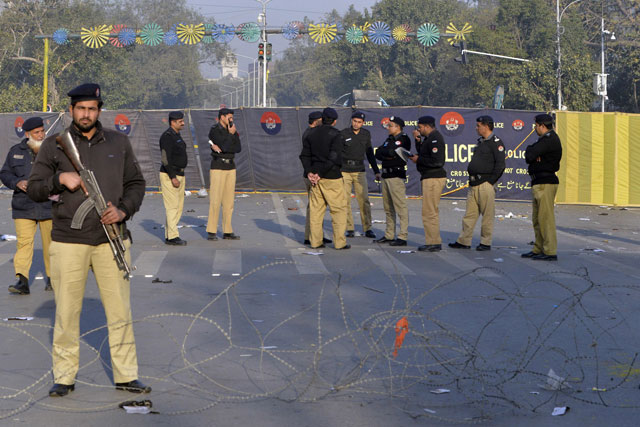 Policemen gather at the site of a suicide bombing in Lahore on February 14, 2017. PHOTO: AFP

US condemns blast in Lahore
The United States government expressed its condolences to the families of those killed in the Lahore blast while condemning the cowardly attack.

US State Department Deputy Spokesperson Mark Toner said during a press briefing in Washington that the United States was with Pakistan in its fight against terrorism. He also added that the US stood by its stance on peace in South Asia, according to Radio Pakistan.