Panell­ists call for politi­cal differ­ences to be kept aside at 'Cinema Across the Border­s' sessio­n
By Yusra Salim / Photo: Athar Khan
Published: February 14, 2017
Tweet Email 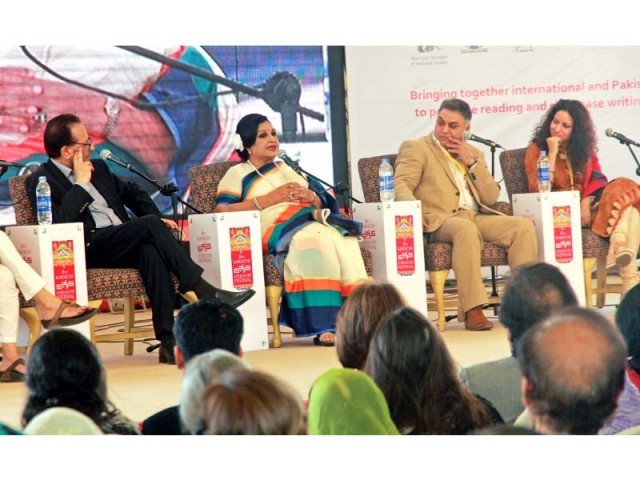 Speakers suggested an acting institute be established for people to hone their skills. PHOTO: ATHAR KHAN/EXPRESS

KARACHI: The audience settled in at the garden area on the last day of the eighth Karachi Literature Festival to relive the 60s era of Pakistani cinema. The then superstars Nadeem Baig and Shabnam shared the stage for discussion on the topic.

The session, ‘Cinema Across the Borders’, which was moderated by Umber Khairi, also included actors Asif Raza Mir and Mustafa Qureshi and Mumbai-based media personality Priyanka Jha as panelists.

KLF kicks off 8th edition by giving voice to the voiceless

Sketching the state of cinema, Khairi said that despite the cultural and traditional similarities both India and Pakistan face political differences.

Starting the discussion, Baig said that there are no boundaries for artists and an artist cannot be bound in a specific area. Remembering the 1960s era, he said that those were the best times of cinema when Pakistani media had good movies because there were good writers, directors, producers and music directors.

“We should work in other countries but our first priority should be guarding our own industry,” said the yesteryear superstar, adding that there should be a barter system where if two Indian movies are releasing here [in Pakistan] than two Pakistani movies should also be released in India.

He also appreciated the efforts of actors moving around and going to other countries and encouraged the jealousy of on-camera competition.

Seconding his view, Shabnam pointed out that artists and sports figures should not be involved in the politics between countries. “Artists are encouraged to go all across the borders even in India, Pakistan and Bangladesh,” she said.

Differing from Baig’s view, Mir said that more bad has happened to Pakistani cinema than the cinema industry of any other country. “We were unfortunate that we had General Ziaul Haq who has brought loss to us which cannot be explained,” said Mir, wishing that period never existed in the country.

Indian cinema is the reason for the revival of Pakistani cinema, pointed out Mir. “We are in the initial phase of revival of the industry but we are still not far from our neighbours in terms of technology in films,” he added.

Appreciating and answering Khairi’s question of the promotion of dubbed movies from Bangladesh since Turkish dramas have been a phenomenal success in the country, Mir said we can expand our wings to Sri Lanka, Bangladesh and Nepal because the proximity will help and co-production is a main factor which can be of help”.

Both of the countries missed each other, said Mir, commenting on the ban of Indian and Pakistani movies in either country.

Nothing can stop an actor, believed Jha. Giving an example of Hollywood and the opportunities they provide to actors from all over the world, she said that the Indian film industry is no different from others and it is not against any artists.

Sharing an incident at a show she recorded before the release of movie Kapoor and Sons, she said that the girls from all over the building in her office came to see a glance of Fawad Khan out of excitement.

Qureshi, who joined the discussion late, targeted the state and its role in the conflicts between India and Pakistan. “Our people pay for the Indian movies which are used by Indians against the atrocities for us,” he said, adding that the industry is like a fourth world while [we] the actors are suffocating in this era.

“We can only take out the frustration of the people by promoting art,” he said.

To promote acting and the local industry, Baig suggested that there should be an acting institute where people can learn to hone their skills.