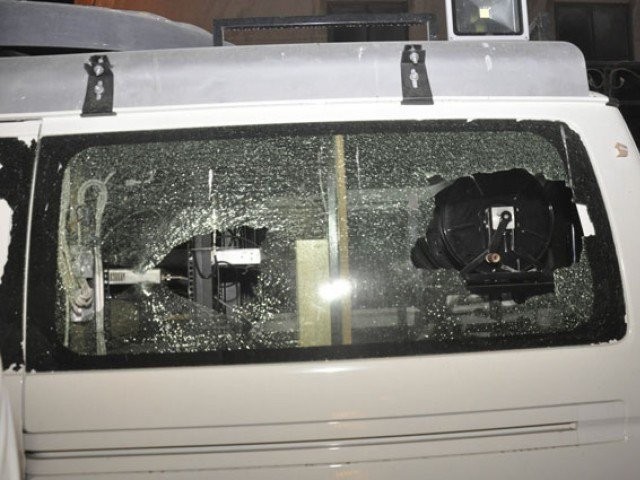 The broken glass of the attacked DSNG van. PHOTO: EXPRESS

TTP spokesperson Mohammad Khorasani in a statement said, “The media is not impartial and we’ve issued several warnings to them.”

An assistant cameraman of Samaa TV was killed when a DSNG van of the channel came under attack in Karachi on Sunday night.

According to Karachi Police spokesperson Adil Rasheed, AIG Mushtaq Ahmed Mahar has announced that anybody who provides information that can lead to the suspects behind the shooting on Samaa TV cameraman, Taimoor, will be awarded Rs1 million.

The identity of the informer will be kept confidential, he assured.

Meanwhile, Samaa TV employee Syed Imtiaz Ali, who was in the van at the time of the shooting, has registered an FIR (No. 28/17) at the North Nazimabad police station. The case has been registered against unidentified persons under section 302 (murder) of the Pakistan Penal Code and section 7 (punishment for act of terrorism) of the Anti-Terrorism Act.

“Armed assailants were following us from KDA Chowrangi and opened multiple fire at the DSNG van as soon as we crossed it,” said Samaa cameraman Asif. The DSNG was on its way to cover an attack on a police APC near Five Star Chowrangi in the metropolis. TTP also claimed responsibility for the cracker attack on the police APC.

Days before the attack, TTP splinter group Jamaatul Ahrar released a video threatening journalists. Following the release of the video, various journalist groups announced protests across the country. A rally was also planned outside the National Press Club, Islamabad.

Killing of #SAMAA assistant cameraman Taimoor Khan is a sad incident. Share the grief of Media, SAMAA and Taimoor's family.