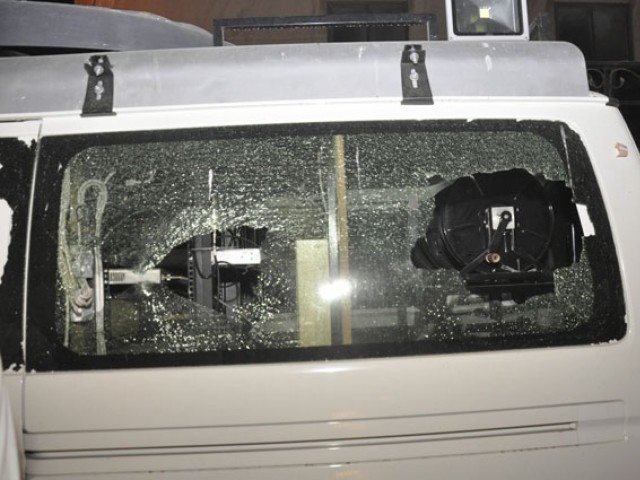 The broken glass of the attacked DSNG van. PHOTO: EXPRESS

Assistant cameraman of private TV channel, Samaa, was killed as the organisation’s DSNG van came under an attack in Karachi on Sunday.

According to Samaa TV, the channel’s team was on the way when gunmen opened fire at the vehicle near KDA area, leaving 22-year-old Taimur Abbas in critical condition. He was shifted to the Abbasi Shaheed Hospital, where he succumbed to his injuries.

@SAMAATV DSNG attacked at N. Nazimabad, Karachi. Team Samaa member Taimoor lost his life in the attack. Do remember him in your prayers…

Politicians from various political parties, religious leaders condemned the incident, demanding the arrest of the culprits.

Prime Minister Nawaz Sharif also condemned the incident, terming it an “attack on the freedom of speech”. The federal government will extend all necessary assistance to the provincial government to apprehend those responsible for this heinous crime, he added.

In a similar attack in November 2015, unidentified gunmen attacked a Dawn News DSNG van in the Essa Nagri area of Karachi, injuring one staff member.

This artist knows how to use his talents to make money