KFC has launched a pizza and people can't handle it

KFC has launched a pizza and people can't handle it

'Chizza' is a combin­ation of pizza and fried chicke­n, with fried chicke­n as the crust
By News Desk
Published: February 11, 2017
Tweet Email 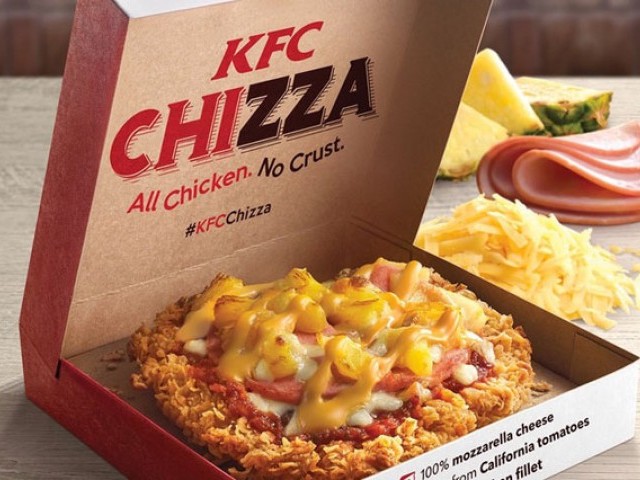 Fast food giant Kentucky Fried Chicken (KFC) has come up with a mashup which is any fried chicken lovers dream come true.

The fast food giant known for its fried chicken has taken a step further and is serving pizza. KFC and pizza? You read that right!

However, this is no ordinary pizza. The ‘chizza’ is a combination of pizza and fried chicken, with fried chicken as the crust.

“All chicken, no crust” as KFC describes it, the chizza is “100% chicken fillet marinated, perfectly seasoned and cooked to a glorious gold, then layered with delicious pizza toppings such as pizza sauce, chicken ham, pineapple chunks, mozzarella and topped with signature KFC cheese sauce.”

Loafology: Another music in a different kitchen

After news of the chizza spread worldwide, KFC issued a clarification stating that the new item is exclusive to Singapore. “We wish to clarify that it is currently only being launched in Singapore… so you guys will have to stay tuned to your local KFC FB pages for future updates!” it said.

The legendary #KFCChizza has FINALLY arrived in Singapore!!! Who's excited?! pic.twitter.com/E0QA4A60mC

When inquired about whether the chizza will make it to Pakista, KFC Pakistan representative, Abbas Mehdi, said they’ll announce it soon on their Facebook page.

Here’s what people thought of the chizza: