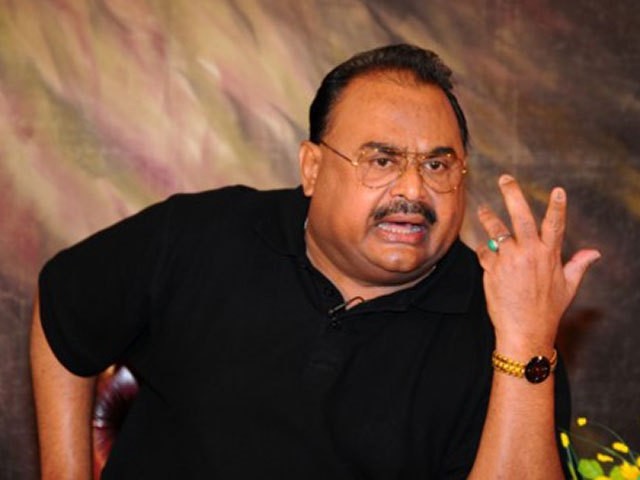 Ministry of Interior gave its approval for the issuance of a red warrant against the London-based leader. PHOTO: MQM

ISLAMABAD: In a major move, the Ministry of Interior on Tuesday gave its approval for the issuance of a red warrant against London-based Muttahida Qaumi Movement founder Altaf Hussain.

The Sindh Home Department had sought the red warrant from the Ministry of Interior for producing Altaf before the court, sources said.

The red warrant is an international notice sent to the International Criminal Police Organisation (Interpol) that seeks arrest and extradition of an individual wanted by law for some serious offence.

The approval for the red warrant was issued apparently in compliance with the orders of an anti-terrorism court, which is hearing three identical cases against Altaf pertaining to his August 22 anti-state speech.

The Sindh government had approached the interior ministry in this regard.

Altaf allegedly incited his workers to violence against some media houses, in addition to chanting slogans against the state of Pakistan, sources said and added that a letter in this regard would soon be dispatched to Interpol.

It is learnt that the Federal Investigation Agency (FIA) would approach Interpol in Lyon (France) to get the red warrant issued for Altaf Hussain’s arrest.

The federal agency would also submit documents that would establish the fact that the issuance of red warrant against him was obligatory. If satisfied with these documents, Interpol would hand the red warrant over to authorities in the United Kingdom for further process.

An interior ministry spokesman in a statement said: “The MQM founder is wanted in several cases, including hate speech and terrorism in the country.

“During the previous hearing, an anti-terrorism court (ATC) directed the authorities concerned to ensure Altaf Hussain’s presence in the court during next hearing,” the spokesman further said.

Pakistan does not have an extradition treaty with the United Kingdome. However, in May last year a man charged with a double-murder case in the northern English city of Bradford was extradited to the UK from Pakistan.

A Red Notice is a request to locate and provisionally arrest an individual pending extradition. It is issued by the general secretariat of Interpol at the request of a member country.

The Ministry of Interior had also dispatched a reference to the British government against Altaf Hussain last year for his outbursts against Pakistan and inciting his workers to violence in Karachi.

As concrete measures on the reference by the UK authorities are yet to be known, experts attach little hope that Hussain would be extradited to Pakistan to face legal charges.

In just one year: Government’s debts, liabilities grow to Rs14.54tr