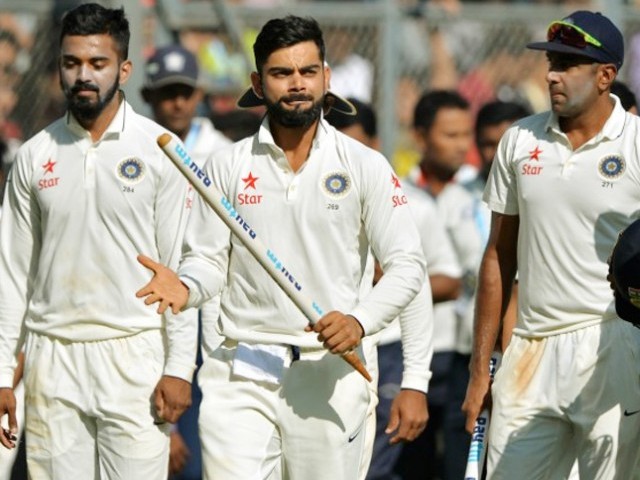 HYDERABAD: India have been warned against complacency as they look to extend their record-breaking unbeaten run to 19 matches when they host Bangladesh in a Test for the first time this week.

Following their recent demolition of England in all formats, Virat Kohli’s side will be heavy favourites to cement their status as the world’s number one Test side in the one-off match in Hyderabad when it begins on Thursday.

But wicketkeeper Wriddhiman Saha warned it was vital not to be distracted by the prospect of a looming high-profile series against Australia later this month as they face the ninth-ranked Bangladeshis.

“Ranking-wise one may think they will be easier opponents on paper but we cannot underestimate them,” said Saha. “I don’t know when are the Aussies coming but as of now the focus is on Bangladesh Test. After they’re here we will think about it.”

Bangladesh held India to a draw in June 2015 in a rain-affected Test in Fatullah the last time they met. They have lost six of eight home Tests against India with two drawn but now get a chance to face them away from home for the first time since gaining full status 17 years ago.

Bangladesh’s Test win in the drawn two-match series against England last October has given the team belief that they can compete against the top Test nations. And despite the subsequent 2-0 defeat in New Zealand, Indian conditions should be more favourable to their spin-heavy bowling attack.

The tourists’ captain and wicketkeeper Mushfiqur Rahim played down the significance of Thursday’s Test, even if the invitation to India has been a long time coming.

“I don’t believe that this is a historic Test. To me, this is just another Test,” said Rahim. “Yes, we are happy and excited to show the world what our team is capable of doing in India, but I am not really thinking about the number of years after which we are going to play a Test in India.”

Bangladesh will be without opening batsman Imrul Kayes who pulled a thigh muscle in a warm-up match on Monday while left-arm fast bowler Mustafizur Rahman, who had a recent shoulder problem, was left out of the squad because of a lack of match fitness.

India are expected to make one change from the side that won the final Test against England in December as Saha returns from injury.