Tale of a woman spread across borders, religions

Tale of a woman spread across borders, religions 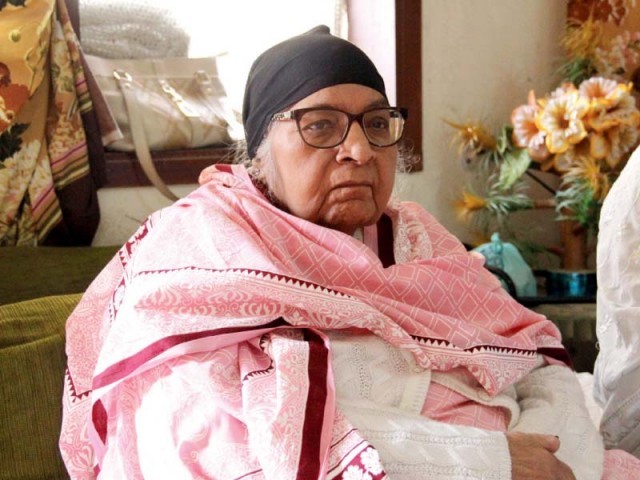 KARACHI: Harbhajan Kaur’s life story is nothing short of a film, complete with all the gut-wrenching horrors of Partition and the helplessness of families divided by hastily drawn international boundaries.

It was in 1946 when Kaur, barely a teenager at the time, was married to a Sikh man. “I was born in the house of a Sardar and I got married into the house of a Sardar,” she told The Express Tribune. Kaur moved from her hometown Sansi near Amritsar to Lahore where she lived for a short period until the news of Partition reached her family. They were migrating to Amritsar when the caravan was attacked and everyone, except the women on board, was killed.

She was one of the surviving girls who converted to Islam and married a man named Afzal Khan, who was 16 years older than her. Kaur became Shahnaz Begum. The nikah was solemnised at a mosque in Kohat and the couple moved to the Koela Godaam area of Karachi. They had six children – Hameeda, Khurshid, Zubeda, Jamila, Iqbal and Rizwan. However, Hameeda died at a young age.

Pakistan looking to resume talks with India after state elections

It was after a lot of prayers that she was blessed with a boy, so the two-year-old Rizwan was the apple of his mother’s eye.

In 1962 when the government relaxed the visa restrictions between India and Pakistan, Khan offered to take her to her hometown and meet her family. When her father met her, he refused to accept her conversion and marriage and forced her husband to leave her behind. Even though she tried to keep Rizwan with her, Khan refused and left for Pakistan.

It was around this time that Zulfikar Ali Bhutto was the foreign minister of the country. When Khan filed a case against his Indian in-laws the verdict did not come in his favour. Khan stayed quiet and married someone else.

Meanwhile, Shahnaz Begum became Harbhajan Kaur again and was married to a Sikh poet, Gurbachan Singh, who had a five-year-old son, Romy, from his previous marriage.

A victim of Partition for the second time, Kaur lost touch with her Pakistani family and continued living in India. “Like every night one prays on rosary, I used to pray for my children and recall their names before falling asleep,” she shared.

Her step-son Romy moved to the United States in 1989 and later invited his parents to join him. Kaur’s second husband died in 2007 and that is when Romy offered to look for her missing children. He placed an ad in an Urdu newspaper in Pakistan.

The ad caught the eyes of Rizwan’s boss, recalled Kaur’s daughter Jameela. It was February 9, 2013 – a date etched in the entire family’s memory. The family reached out to Romy and by February 13, they met her virtually via Skype.

By March 4, Kaur’s daughter, Khurshid, who lived in Canada, was able to travel to the US to meet her. After the reunification, Kaur was desperate to meet her youngest son. “I won’t die until I see him,” she would tell the family over the phone.

A year after abduction, child reunited with mother

Her wish came true by the end of April that year when Romy was able to bring her to Pakistan to meet her children for the first time in 51 years.

Kaur is currently in Karachi for her second visit and this time she is accompanied by Khurshid. Her visa expires on April 9 but Kaur admitted she does not want to leave her children. Her family has now extended to include 15 grandchildren and 37 great grandchildren, the youngest of whom is amused by his great-grandmother. “She has wings, she can fly,” he giggled.

“We used to say a prayer each night for her safe return home,” said her daughter, Iqbal. “At the same time, we thought she was in India and must have died by now. We prayed that she rest in peace.”

The children find it hard to believe they are reunited with their mother. “We hope she remains with us forever,” said Zubaida. “We will look after her, we will serve her,” added Rizwan as he sobbed.

The story of Harbhajan Kaur aka Shahnaz Begum will be shared at the 8th Karachi Literature Festival taking place this weekend.