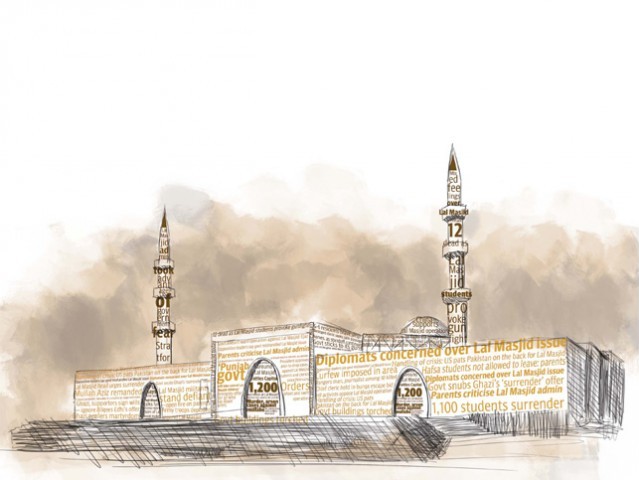 CDA has not taken any steps to address illegal mosque construction in the capital. ILLUSTRATION: ANAM HALEEM

Lal Masjid’s small building doesn’t live up to its larger-than-life reputation – as the institution that was besieged by military commandos after it openly defied the state.

Four years later, many believe the Lal Masjid episode was a debacle, and solely blame former president Pervez Musharraf for ordering the operation. But the factors that led to the events that unfolded at Lal Masjid persist.

The crisis began with the Capital Development Authority (CDA) demolishing eight mosques in the city and culminated in Lal Masjid’s siege. Four years later, the government has taken no apparent steps to designate anyone with the responsibility of monitoring mosque activities or solve the issue of illegal mosques.

“This requires a coordinated approach between the ministry of interior, law enforcement agencies and the CDA,” says the authority’s chairman, Imtiaz Inayat Elahi. He agrees that even though the issue has been raised in the National Assembly, “nothing seems to have been done about it.”

Concerns over madaris run by Lal Masjid’s administration persist. In December, The Express Tribune reported that residents of the E-7 and F-7 sectors had sent a letter to the prime minister, asking him to shift Jamia Faridia from the E-7 sector to the land allocated for it.

Jamia Faridia is one of the many madaris run by the management of Lal Masjid in Islamabad and its outskirts.

CDA says it has “learnt a lesson” from the episode of Lal Masjid, but the number of illegally constructed mosques and madaris in the city is incomprehensible for its size.

“The CDA obviously does not have a security force attached to it,” Elahi says. “It is a very pressing issue.” However, the CDA has worked with the police to carry out operations against encroachers.

“That (initial) act of demolishing mosques only served to inflame matters,” says Maulana Amir Siddiq, naib khateeb of Lal Masjid. He believes that that while “mosques should be given a certain degree of independence, they are a place of religious education” the responsibility to control mosques should be the state’s.

“The issue of mosques that people say are being built illegally should be looked at. Take schools for example; they have been given such huge spaces. There is usually a need for a mosque or a madrassa in an area, which is why they are built. The government should consider this need when they are planning an area.”

As worshippers leave Lal Masjid after Friday prayers, they drop money on a sheet spread near the gate. The mosque is collecting donations for the repairs of its courtyard and roof. A boy drops a Rs5 coin into the pile of banknotes. A man nudges his child forward with Rs25. Someone has left Rs1,000.

“Initially,” Siddiq recalls, “people were a little hesitant in coming here. This was not just a Pakistani issue, it was prominent worldwide. But now, as you can see, the mosque is full. The operation had a deep impact on people. A lot of expatriates returning to Pakistan come here and talk to us about what happened. They want details.”

When asked if intelligence agencies and the police are keeping an eye on Lal Masjid, Siddiq demurs. “Monitoring is being done everywhere, it is not just here. This is a problem for all madaris. They did contact us when we started holding classes for Jamia Hafsa students at the old ground. We said, ‘If you can’t rebuild the madrassa, the students are ready to study under the open sky’. Then they asked us to stop protesting and find a solution.”

He says the government is still reluctant to take up Lal Masjid’s issues, such as its reconstruction. “It is still very much in the global limelight, so they probably think it will create a problem for them.”