Draini­ng a glacia­l lake normal­ly is done during the summer, when the draine­d water can be stored­
By Reuters
Published: February 6, 2017
Tweet Email 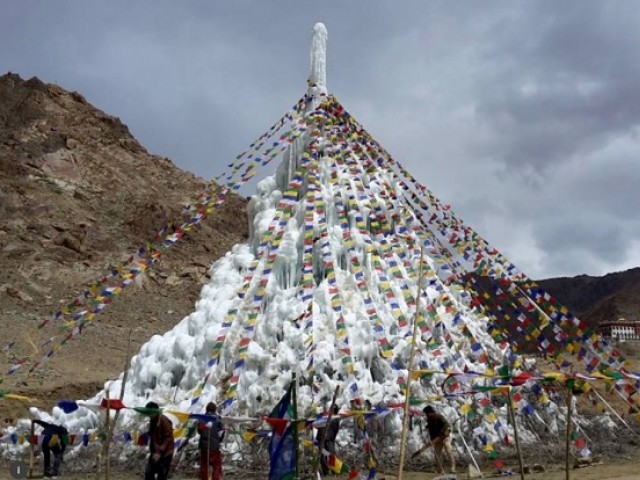 Wangchuk and his team will begin work on the project in November with engineers and experts from Sikkim. PHOTO: REUTERS

GANGTOK: The government of Sikkim in India’s northeast is lowering the risk of a devastating flood by draining water from a dangerously overfull glacial lake – with plans to turn the excess water into towers of ice for farmers to use in the warmer months.

The water level in the South Lhonak glacial lake is expected to lower by 2 metres from its previous depth of 20 metres by the end of the winter, thanks to a process of siphoning that began last September, experts and Sikkim government officials said.

A sensor that monitors sudden fluctuations in the water level also has been installed near the lake, which lies at an altitude of over 5,400m (17,500 feet) and is accessible only by a five-day trek over high passes. But perhaps the most innovative part of the operation is that, under current plans, some of the water drainage pipelines will have their final sections raised vertically. As pressure forces water out of the raised tip into sub-zero air, the flow will form ice cones.

Over the past three winters a similar project in Ladakh, designed by environmental engineer Sonam Wangchuk, has created an ice cone 20m (65 feet) high, and five smaller ones of about 4m. Wangchuk, who is now working on the Sikkim project, said that in late spring meltwater from the cones can be collected in tanks and fed onto planted land using a drip-irrigation system. The largest ice cone in Ladakh supplied about 1 million litres of water, he said.

The cones resemble stupas, or towers used in Buddhist worship, that are found across Ladakh and also in Sikkim. “Creating the ice stupas is an effort to help the farmers get water when they need it the most. We are also exploring ice climbing, ice skating, ice hockey and ice sculpture of the stupas in order to develop a new form of winter tourism in Ladakh,” Wangchuk said.

The potential danger posed by the Sikkim lake was first assessed in 2013 by scientists from the National Remote Sensing Centre (NRSC) in Hyderabad. They reported that by 2008 the surface area of the lake had increased to more than five times its size in 1977, from about 17 hectares (43 acres) to nearly 100 hectares (244 acres).

According to the International Centre for Integrated Mountain Development (ICIMOD), a regional intergovernmental organisation, rapid increases in the volume of glacial lakes are usually the result of faster glacial melt associated with climate change.

The risk such lakes present is that the rocky moraines at their feet could give way suddenly under the pressure of the water, triggering a massive outburst flood that would drain most of the lake at once. The NRSC scientists estimated that the South Lhonak lake had a 42 percent probability of bursting and causing devastating floods downstream in populated areas, a risk they rated as “very high”. They estimated its volume to be nearly 20 billion litres, although measurements in 2014 by the team that installed the monitoring system, from the Centre for Development of Advanced Computing, a national government body, suggested that the lake could contain as much as 53 billion litres of water.

The South Lhonak lake is one of 203 glacial lakes in the Hindu Kush Himalayan region – out of a total of more than 8,700 – identified as potentially dangerous by ICIMOD in a 2010 report.

To help deal with the threat, Sikkim’s Department of Science and Technology and Climate Change has begun working with Wangchuk – an engineer from Ladakh in Kashmir – to drain the water from the glacial lake, said Dhirren Shrestha, a department official.

Wangchuk said that three sets of high-density polyethylene pipes are being used to carry away water, enabling a total discharge of 150-180 litres of water per second. A second stage of the operation is scheduled for May and June this year, when engineers plan to install up to 16 pipelines to lower the water level in the lake by a further 3m.

Eventually, however, some of the water will be captured rather than simply flow away, as Wangchuk works to recreate an innovation he previously experimented with in Ladakh in Kashmir – turning some of the siphoned water into massive towers of ice.

As it flows out of the raised end of a discharge pipe, “it freezes as it falls to gradually form an ice cone,” Wangchuk explained. He and his team will begin work on the project in November with engineers and experts from Sikkim.

Shakil Romshoo, who heads the Earth Sciences department of Kashmir University, said that draining a glacial lake normally is done during the summer, when the drained water can be stored or used for irrigation or small-scale hydroelectric power generation.

“Ice stupas, if feasible under the Sikkim conditions, (are) just one of several short-term storage methods for storing excess water from a glacial lake during the winter,” Romshoo said.

Iranian student back in US after being deported