Apart from rough seas and winds of betwee­n 75 and 80 kilome­tres, there was rare snowfa­ll on Jebel Jais
By AFP
Published: February 4, 2017
Tweet Email 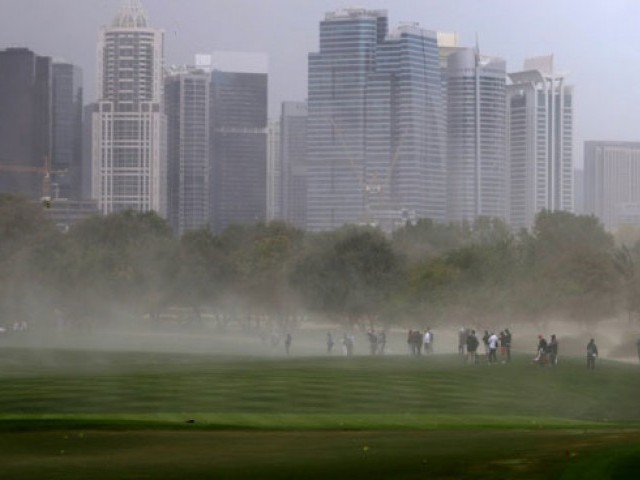 A sandstorm sweeps across the fairway during second round of the Dubai Desert Classic at the Emirates Golf Club in Dubai on February 3, 2017. PHOTO: AFP

A snow alert has been issued in the United Arab Emirates where a rare storm and high winds Friday toppled one of thousands of cranes in the Gulf desert state.

One person was injured and three cars were destroyed in a fire sparked by the collapse of the crane on Dubai’s main thoroughfare, the multi-lane Sheikh Zayed Road, local officials said.

The storm led to the cancellation of a stage in the Tour of Dubai on Friday because of the strong winds posing a danger to the cyclists, organisers said.

The tour’s 170-kilometre (110-mile) penultimate stage, from Dubai to Hatta near the Omani border, would have left riders exposed to blustery winds. Saturday’s stage was to go ahead as planned.

Apart from rough seas and winds of between 75 and 80 kilometres (45 and 50 miles) an hour across the UAE, there was rare snowfall on Jebel Jais, a mountain in Ras al-Khaimah emirate.

The met office said there was a depth of 10 centimetres (four inches) of snow in some places on the less than 2,000-metre (6,500-foot) mountain.

The mercury fell to minus two degrees Celsius (28 Fahrenheit), with the light snow serving as a magnet for hundreds of Emiratis snapping pictures with smartphones to post on social media sites.