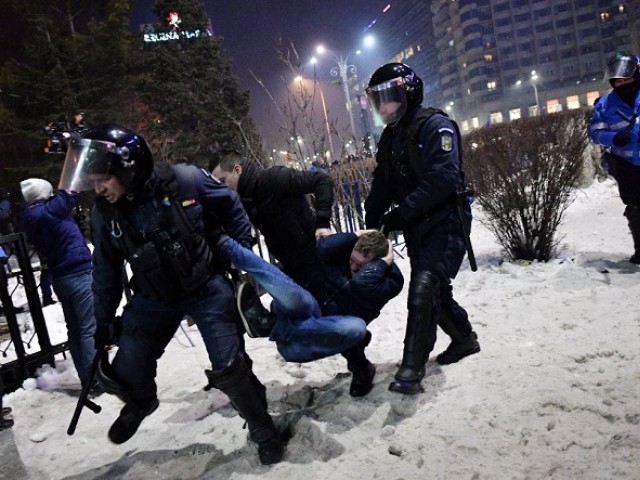 Romanian riot police evacuate a protester during a demonstration against controversial decrees to pardon corrupt politicians and decriminalize other offenses in front of the government headquarters in Bucharest, on February 1, 2017. PHOTO: AFP

BUCHAREST: Hundreds of thousands of people hit the streets across Romania to protest against the government’s decriminalising of a string of corruption offences, the largest demonstrations since the fall of communism in 1989.

Between 200,000 and 300,000 protesters, according to media estimates, braved sub-zero temperatures to demonstrate, with some shouting “Thieves!” and “Resign!” a day after the government passed an emergency decree.

In the capital Bucharest some demonstrators hurled bottles, firecrackers and stones at security forces, who responded by firing tear gas. A few police and protesters were lightly injured.

For the second straight night crowds also hit the streets in other cities across the country – including in Timisoara, cradle of the 1989 revolution.

Over a matter of days that uprising nearly 30 years ago forced dictator Nicolae Ceausescu from power, ending with he and his wife being summarily executed on December 25, 1989. 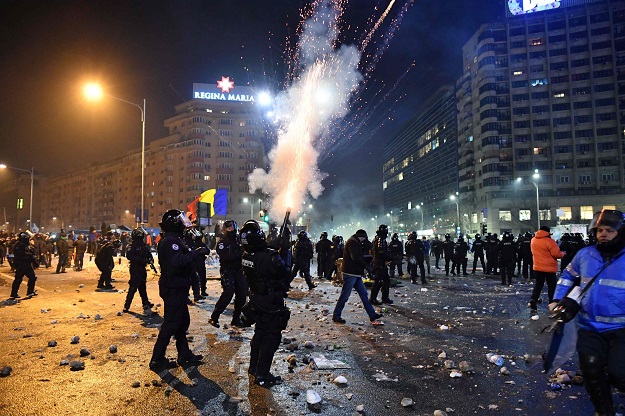 Romanian riot police fire tear gas to disperse people taking part in a protest against controversial decrees to pardon corrupt politicians and decriminalize other offenses in front of the government headquarters in Bucharest, on February 1, 2017. PHOTO: AFP

In the emergency decree issued late Tuesday, the government decriminalised certain corruption offences and made abuse of power punishable by jail only if it results in a monetary loss of more than USD 47,500.

Romania’s left-wing government under the Social Democrats (PSD) has only been in office a few weeks after bouncing back in elections on December 11, barely a year since mass protests forced them from office.

The government had remained silent since Tuesday evening, but on Wednesday Justice Minister Florin Iordache wrote on his Facebook page that there was “nothing secret, illegal or immoral” about the emergency decree. Bucharest said it is putting legislation in line with the constitution. 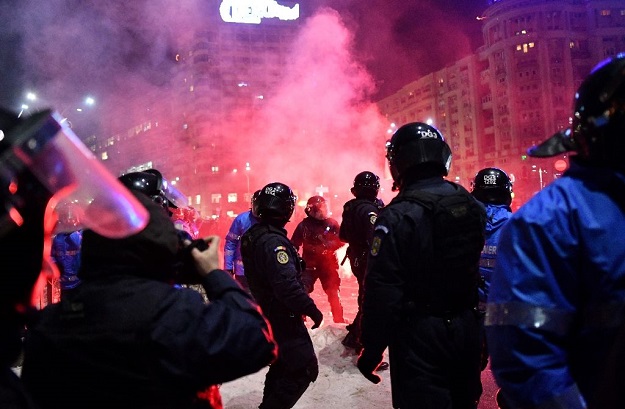 Romanian riot police clash with protesters during a demonstration against controversial decrees to pardon corrupt politicians and decriminalize other offenses in front of the government headquarters in Bucharest, on February 1, 2017. PHOTO: AFP

But critics say the main beneficiary will be PSD leader Liviu Dragnea, currently on trial for alleged abuse of power, as well as other left-wing politicians.

Dragnea, 54, is already barred from office because of a two-year suspended jail sentence for voter fraud handed down last year. His abuse-of-power trial, which began on Tuesday, concerns 24,000 euros.

Another initiative, which Prime Minister Sorin Grindeanu will submit to parliament, will see around 2,500 people serving sentences of less than five years for non-violent crimes released from prison.

The government said that this will reduce overcrowding in jails but critics say that, again, the main beneficiaries will be the many officials and politicians ensnared in a major anti-corruption drive of recent years.

Only last week the European Commission commended the efforts of ex-communist Romania, which joined the European Union together with neighbouring Bulgaria in 2007 as the bloc’s two poorest members. 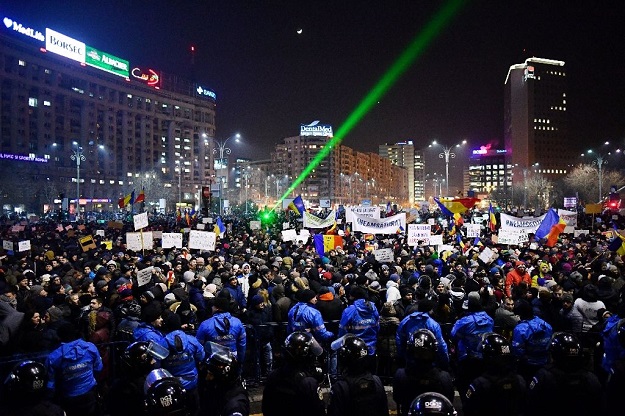 Romanian riot police stand guard as people demonstrate against controversial decrees to pardon corrupt politicians and decriminalize other offenses in front of the government headquarters in Bucharest, on February 1, 2017. PHOTO: AFP

“The fight against corruption needs to be advanced, not undone,” they said. “The Commission warns against backtracking and will look thoroughly at the emergency ordinance in this light.”

Centre-right President Klaus Iohannis, elected in 2014 on an anti-graft platform and a sharp critic of Dragnea, on Wednesday called the decree “scandalous” and moved to invoke the constitutional court.

Both decrees were published earlier this month, sparking protests last Sunday that drew 40,000 people including 20,000 in the capital, and more than 15,000 a week earlier.

The laws have been heavily criticised by several Romanian officials and institutions, including the attorney general, the anti-corruption chief prosecutor and the president of the high court.

“I am outraged. The PSD won the elections but that doesn’t mean they can sneakily change the penal code in the middle of the night,” said protester Gabriela State, 46.

On Wednesday some 20,000 demonstrators gathered in the western city of Cluj, an AFP correspondent said, while there were 15,000 in Timisoara and 10,000 in Sibiu in central Romania.