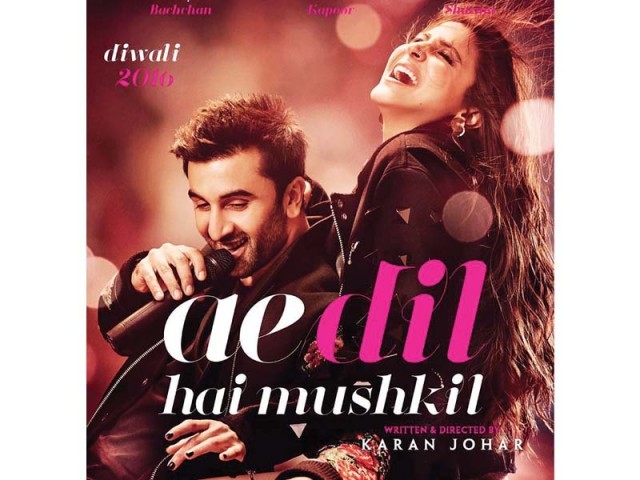 LAHORE  : The information ministry and Central Board of Film Certification (CBFC) have cleared Karan Johar’s Ae Dil Hai Mushkil for screening in Pakistan.

The superhit romantic drama – which stars Ranbir Kapoor, Anushka Sharma, Aishwarya Rai Bachchan and Pakistani actor Fawad Khan – was issued an NOC sometime back and was submitted to the censor boards in the country, three months after being pulled into a political struggle between India and Pakistan.

However, the censor boards of Karachi and Lahore are yet to issue an NOC.

The film originally came out on October 28 last year. Now that the political situation between India and Pakistan has somewhat improved, the government has decided to resume the screening of Bollywood films and local distributors have already made plans of purchasing all those that were released over the last four months, especially super hits like Aamir Khan’s Dangal.

According to the distributors, both Dangal and Salman Khan’s wrestling drama Sultan will be screened, depending on the business generated by Ae Dil Hai Mushkil.

“We will monitor the public’s response to Ae Dil Hai Mushkil first and then decide whether or not to purchase the other films accordingly,” revealed a Distribution Club official.

I was dragged to court for being who I am: Kangana Ranaut