ISLAMABAD / LAHORE: Prime Minister Nawaz Sharif on Tuesday gave the thumbs up to the information, broadcasting and heritage ministry to lift the ‘ban’ on screening Indian movies in Pakistan.

According to an official handout issued by the information ministry, the government is “pleased to continue the existing open policy to display all international movies (including Indian films) in Pakistani cinemas”.

The statement, however, pointed out that the cinema houses would be allowed to screen movies only after approval from relevant censor boards.

An official stated that the premier took the decision after being briefed by Information Minister Marriyum Aurangzeb.

Marriyum, who is also the head of the special committee formed by Prime Minister Nawaz Sharif for the clearance of Indian movies to be screened in Pakistan, presented a report as well as suggestions on the issue. 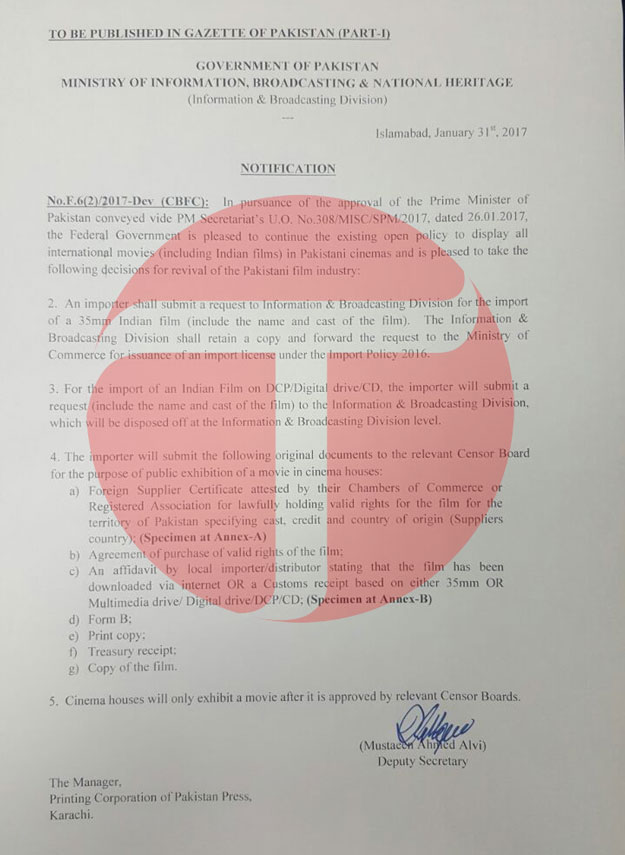 In the meeting it was decided that the ban will be lifted following Ministry of Commerce’s new import order, an official privy to the matter told The Express Tribune.

Earlier the meeting was scheduled on January 30 but could not take place.

Panel to take up Indian movies’ clearance on Monday

Meanwhile, in an official statement issued on January 28, Marriyum said the government had decided to maintain the present policy regarding the import of Indian films after reviewing the benefits Pakistani cinema trade can derive from their exhibition.

The release will mark the end of the self-imposed ban on Bollywood films in the country.

Following Uri attacks and ‘surgical strikes’ along the Line of Control, Pakistani cinema owners in September 2016 had decided not to screen Indian movies until tensions between the two countries receded. They took the decision after the Indian Motion Picture Producers’ Association banned all Pakistani artists from working in film projects in India.