United manage­r made commen­ts after his side’s 4-0 over Wigan in FA Cup
By AFP
Published: January 30, 2017
Tweet Email 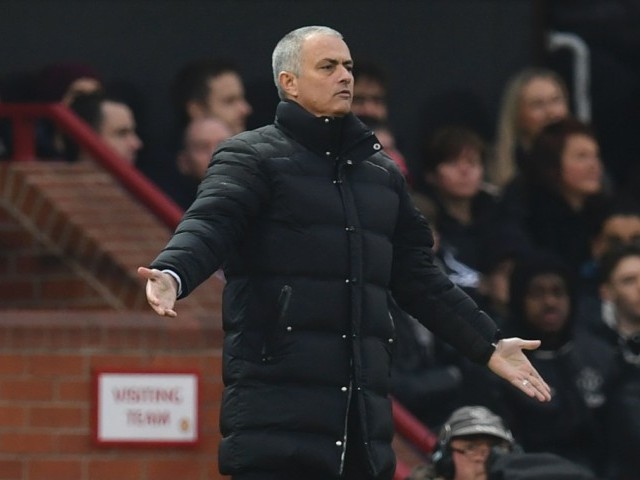 Jose Mourinho watches his players from the touchline at Old Trafford in Manchester, England, on January 29, 2017. PHOTO: AFP

MANCHESTER: Manchester United manager Jose Mourinho complained about the lack of help being afforded his team by the football authorities as he attempts to win silverware on four fronts over the final four months of the season.

The irascible Portuguese coach has described a mounting schedule as a ‘nonsense’ and ‘a laugh’ in an extraordinary outburst that followed his side’s comfortable passage into the fifth round of the FA Cup with a 4-0 home win over Championship side Wigan.

That leaves United as the only English team battling for four trophies, the League Cup final with Southampton, the FA Cup, Europa and Premier Leagues, and facing as many as 67 games should they go all the way in the other two cup competitions.

“I think the Premier League is almost an impossible mission but I only think about winning the next match,” said Mourinho, who has complained about the fixture list in England before.

Mourinho takes a dig at Klopp as United reach final

“I can imagine we are going to have some nice gifts. Like Watford today, they had an amazing gift. They played today in the FA Cup and they are to play on Tuesday in the Premier League.

“It’s a laugh. There were so many matches played yesterday, how is it possible a team plays today and plays again Tuesday?

“It is absolute nonsense. This is not just for Watford. I know many of those surprises will be waiting for us,” he added.

Mourinho, who had a shaky start to his tenure at United but righted the ship in the past two months, had a go at title contenders Liverpool and Chelsea saying they had less games to worry about because they didn’t qualify for Europe.

Chelsea’s failure was largely down to him as a disastrous start to the defence of their title last season led to his dismissal but he left club with too much ground to make up to even qualify for the Europa League.

“Compared with other clubs, Liverpool will play 16 matches the rest of the season, Chelsea will play 16, plus some in the FA Cup, and we are in this really crazy situation,” said Mourinho. “Southampton will have 15 days without football before the final. We are going to play two matches against St Etienne and the next round of the FA Cup, so the calendar in the best country in world football is nonsense.”

Mourinho also claimed he had no knowledge of reports linking Wayne Rooney with a possible move to China before the end of the current season with that country’s transfer deadline running until the end of February.

However, one player definitely staying at Old Trafford is German Bastian Schweinsteiger who started his first game in over a year, scoring his first goal in 14 months to complete the rout.

“He is staying,” said Mourinho of a player whom he had banished to train away from the first team earlier in the season.

“He is going on our Europa League list because we have opened spaces with [Memphis] Depay and [Morgan] Schneiderlin leaving and we don’t have many players.

“We don’t have many options in midfield. Ninety minutes today was probably too hard for him but now I think he is happy. With so many competitions and games, he will be an option,” he added.

Federer hints at end of a great career