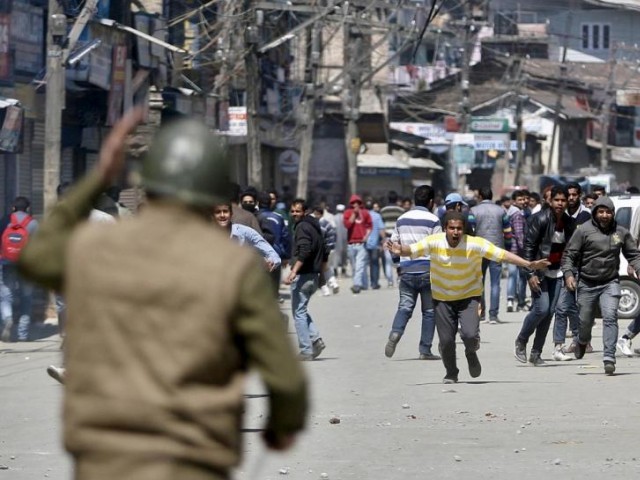 A file photo of a protest in Indian-occupied Kashmir. PHOTO: REUTERS

The oppressed people of Indian-occupied Kashmir (IoK) are looking towards the international community to attain their right to self-determination, Foreign Office Spokesperson Nafees Zakaria has remarked.

The FO official made the remarks while speaking at a seminar in Islamabad. He said Pakistan had always raised the Kashmir issue across global forums to hold India accountable for its actions.

“Pakistan will continue highlighting the issue till Kashmiris attain their right to self-determination, Radio Pakistan quoted the FO spokesperson as having remarked.

Zakaria said the Kashmir movement entered a new phase after July 8, 2016. He was referring to unrest in the disputed region following Burhan Wani’s extra-judicial killing by Indian security forces last year. His death sparked a wave of deadly clashes in the occupied valley — the worst in years — with over 100 people dead and thousands injured.

Kashmir has been divided between India and Pakistan since their independence from Britain in 1947. Both claim the territory in full and have fought two wars over the region.

Relations between the two countries have plummeted in recent months, with India blaming Pakistani militants for a raid on an army base in its part of Kashmir in September last year that killed 19 soldiers. India said it responded by carrying out strikes across the heavily-militarised border, although Islamabad denies these took place. The neighbours have remained engaged in a diplomatic tit-for-tat since then.