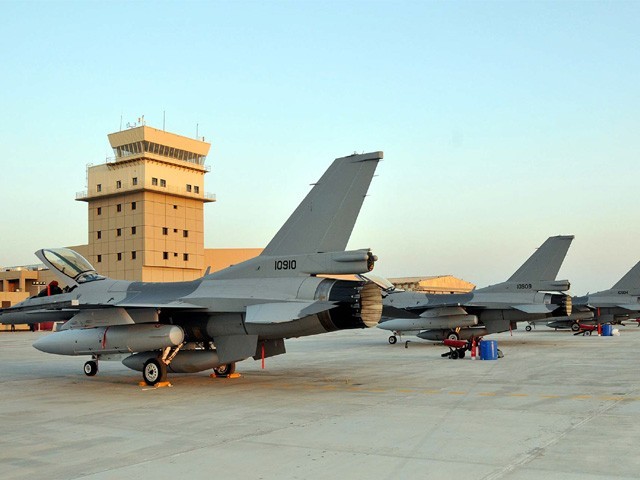 Aside from a $3 million loss, the country’s reputation also took a hit. PHOTO: PPI/FILE

A re-equipment ceremony for No 5 Squadron was held at the PAF’s Base Shahbaz in Jacobabad on Thursday. Chief of Army Staff General Ashfaq Parvez Kayani was chief guest on the occasion. Chief of Air Staff Air Chief Marshal Rao Qamar Suleman also attended the ceremony.

During the ceremony parade, the squadron colour was presented to the squadron commander. Later, a formation of Mirage and F-16 Block 52 aircraft presented a fly-past. In an address at the ceremony, Gen Kayani praised the PAF for its contributions in counter-terrorism operations. “As you know, Pakistan is at war with terrorists, who have disrupted peace and stability in the region and threatened our way of life,” the army chief said. “Pakistan’s armed forces have been battling these elements since 2004. These operations have been conducted through unprecedented close cooperation and support from the PAF. The role of the PAF has been critical.”

Air Chief Marshal Suleman spoke in his speech about the development of the air force. “The first decade of 21 century has seen PAF transforming into a modern and versatile force,” he said. “Our focus has shifted from the traditional threat-based development to development based on capabilities enhancement. Our effort has been to cover the entire spectrum of air warfare to counter all internal as well as external challenges.

“With the induction of Block 52 F-16s, AEW [airborne early warning], aerial re-fuellers and a multilayered air defence system, PAF now has the capability to respond to various threats faced by the nation with efficiency and safety. We have a mission to maintain peace with honour in this volatile region in these uncertain times.”