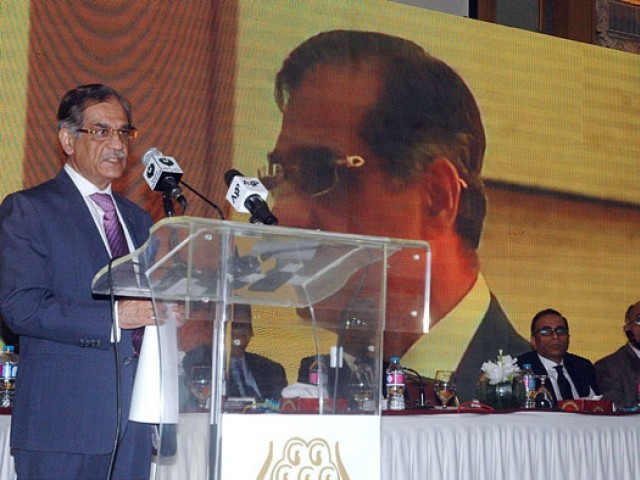 KARACHI: Emphasising the need for speedy and affordable justice, Chief Justice of Pakistan (CJP) Mian Saqib Nisar said that South Asian Association for Regional Cooperation (Saarc) presents an ideal forum through which states can come together for efficient dispensation of justice.

“Saarc has been most successful when it comes to people-to-people cooperation and SAARCLAW is a testament of such cooperation where judges, lawyers, legal academics and law students come under one roof to share experiences and expertise,” he said on Saturday while inaugurating SAARCLAW Conference to mark its 25th anniversary in Karachi.

Justice Nasir called for provision of affordable and expeditious access to justice to those seeking the same through courts, saying members of bar and bench need to be equally cognizant of their responsibilities towards the marginalised sections of the society.

He particularly mentioned the suo motu notice taken only recently by the Supreme Court of Pakistan about the plight of  10-year-old housemaid Tayyaba who was brutally abused and tortured by her employers.

Speaking on the occasion, Chief Justice of Sri Lanka Justice K Sripavan talked about the need for legislation that may directly benefit the masses and all those approaching the courts in quest of justice.

“Saarc countries must make concerted efforts in this regard,” he said and agreed with his Pakistan counterpart that both bar and bench must play their role for the cause.

Senior advocate of Supreme Court of India, KK Venugopal also presented his key note and made his presentation titled Poverty – An Alarming Violation of Human Rights at the conference.

The conference that commenced with the Justice Nasim Hasan Shah Memorial Lecture was also addressed by Justice Asif Saeed Khosa, President SAARCLAW Barrister Mehmood Mandviwala and other senior members of legal community from the region.