Musafi­r took the animal­s on a march to Muzaff­arabad to draw awaren­ess to civic issues­
By Qadeer Tanoli
Published: January 28, 2017
Tweet Email 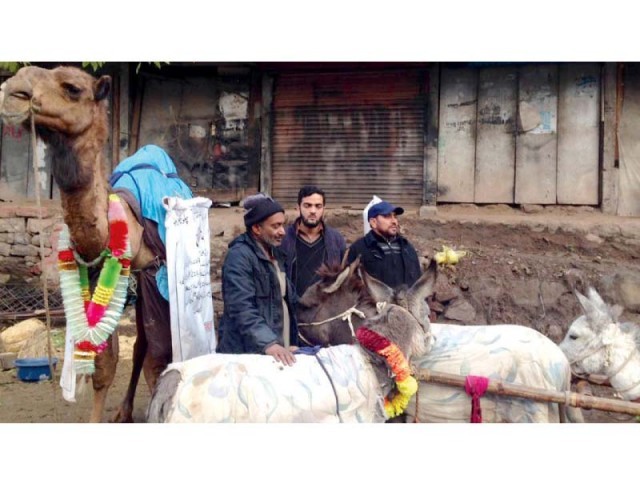 Musafir with his animals. PHOTO: EXPRESS

ISLAMABAD: Have you heard the one about a man, a camel, and three donkeys walking into a state capital? You probably have not, because the Azad Jammu and Kashmir (AJK) government stopped them from entering.

A rights activist from AJK has completed an awareness march around the state, which he undertook with three companions – a camel and three donkeys.

Human rights activist Mahmood Musafir returned home to Kotli 23 days after he had started his journey to raise awareness about the plight of animals and the environment. He set out from Kotli on December 27 and got to Shah Dara, a short distance from Kohala, on January 19, where he was forced to stop for 41 hours. The AJK authorities had not allowed him to enter Muzaffarabad for unknown reasons.

The law minister of AJK later held a dialogue with him and assured him that the issues would be resolved, and Musafir decided to end his march.

Musafir told The Express Tribune that he held the protest march for 27 issues, most of which were linked with basic facilities of life and preservation of the environment.

“The environment is being damaged by deforestation and felling of trees on a large scale, which is also causing threats to Mangla Dam. Schools are without roofs and toilets, while roads are dilapidated. A lot of loadshedding of electricity in the area has made the lives of locals miserable,” he said.

Kotli and Muzaffarabad are around 200 kilometres apart and he took 23 days to reach Muzaffarabad in the chilly weather on his donkey cart. Along the way, he had to stop for 11 days due to rain, and two more days were wasted on account of government delays in granting him entry to the state capital.

He said the donkeys representing the three divisional authorities and the camel represented the central authorities. He bought the donkeys and camel for Rs262,000. Donkeys were easily available in Kotli, but camels, especially female ones, were not available there so he had to get one from Rawalpindi for Rs133,000. Explaining why he bought a female camel, he explained that government (hakumat) is grammatically a feminine noun in Urdu, so he “wanted a female camel to highlight my cause effectively”.

Musafir has a history of holding unique protests in the area, which may be why he was denied entry to Muzaffarabad. Some time ago, he demanded that the authorities allow his donkey to be present on the floor for a budget presentation. The government was so offended by the suggestion that they expelled him from the city.

“The law minister had asked for six months to resolve the issues, but I gave him a year to get there. These tasks are basically basic necessities of life and every citizen of the state is entitled to them,” Musafir said.

He added that the return journey was made easier because traffic police paid Rs5,000 to a truck driver to ship his four-legged friends back to Kotli.

While narrating the tale of his journey he said the people were very cooperative and they extended small donations to him, amounting to a few thousand rupees.

As he was afraid of being arrested anytime he didn’t give the reins of his animals to anyone else. “The everyday cost of keeping these animals was around Rs1,200. There were chances that I would be arrested, so I kept reins in my own hands so that no one else was  burdened with their expenses,” he said.

Musafir sold the donkeys and the camel for a loss after highlighting his cause. He said it was not a bad deal as a price has to be paid to highlight issues and create awareness amongst the masses.