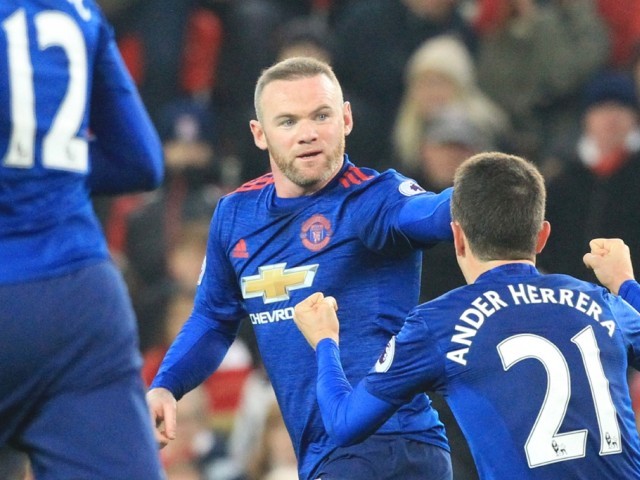 Rooney became United's all-time leading scorer with his 250th goal for the English giants but saw his team fall two more points behind in the title race. PHOTO: AFP

STOKE-ON-TRENT: Jose Mourinho wants record-breaker Wayne Rooney to help Manchester United solve a familiar problem after they failed yet again to turn their dominance into three points in a battling 1-1 draw with Stoke City.

Juan Mata’s own-goal gave Stoke a 19th-minute lead at the Britannia Stadium before Rooney rescued a point for the visitors deep into stoppage-time by becoming United’s all-time leading scorer with his 250th goal for the English giants as he broke Bobby Charlton’s longstanding club record.

While quick to acclaim Rooney’s “amazing achievement”, Mourinho cut a frustrated figure once again as he reflected on two more Premier League points lost and the fact that any chance of United mounting a belated title challenge is receding fast.

Rooney’s well-struck free-kick was small consolation for a performance in which United failed to make the most of the chances they created after Mata’s own-goal.

“It’s an amazing achievement, but the record is broken and now just let him (Rooney) be a normal player again and try and score more goals for us,” said Mourinho. “It was a great goal, and in a team where you lose incredible goals week after week, to get a phenomenal goal like he did is even more astonishing.”

The United manager added: “Obviously in the Premier League, we have drawn too many matches, and today you saw why we draw too many matches. The opposition scored without creating one single chance, and for us to score a goal we have to create six, seven chances, so it’s hard.”

United could find themselves 14 points behind Chelsea if the Premier League leaders win at home to Hull on Sunday and Portuguese boss Mourinho would dearly love an end to his side’s struggles in front of goal.

“Sometimes I’m on the bench and I’m tired of seeing my team play so well, create so many chances and it’s always dramatic to score a goal,” he moaned. “I think for a long, long time that one day we will score every chance. Somebody will go home with six or seven in the basket.”

The former Chelsea boss saw the result as two points dropped rather than one gained, saying: “In spite of keeping a phenomenal unbeaten going, showing an amazing character by the team, showing an amazing empathy between the team and the fans, it is not a good result. I think we lost two points.”

Mourinho, however, praised Stoke’s resilience by saying: “It was a very difficult match, I have to say that Stoke started strong and after they defended with absolutely everything, with grit, emotion and aggression, but good aggression, not a negative one. They did everything to defend their goal.”

Meanwhile, Stoke manager Mark Hughes, himself a former United striker, paid his own tribute to Rooney.

“It’s unbelievable. Sir Bobby’s record stood for over 40 years and a lot of very good strikers have come and gone in that time and not got near the record,” said the Welshman.

“For Wayne to do it, we clearly didn’t want it to happen today, but with top, top players, you only have to give them one opportunity to produce a ball that’s right on the money. A little bit of magic from him has got them something out of the game.”