Contractor blasting through Tharparkar temple in search of granite

Contractor blasting through Tharparkar temple in search of granite 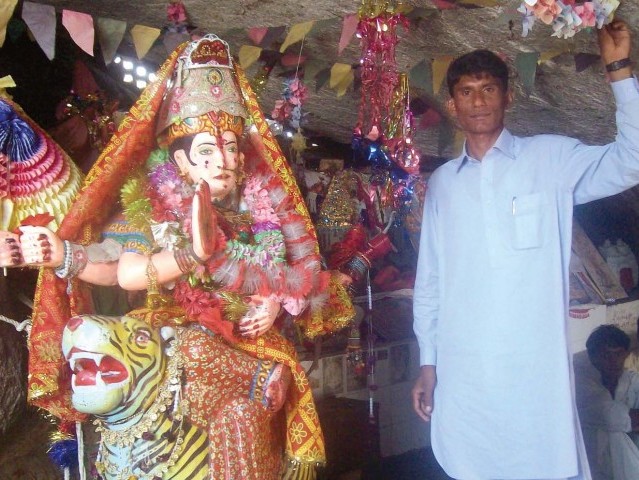 Residents say Karachi company was given lease by Sindh government

This February, when the pilgrims came to celebrate the annual Sardaro mela at their beautiful temple on a hill in Tharparkar, they found that the path leading up to the mandir was destroyed.

Pieces of rock were scattered all around and heavy machinery loomed ominously and silently nearby.

The ancient temple of Durga Mata rests on top of a hill in Choryo village, Nagarparkar in Tharparkar district. Unfortunately, for the yatrees who come from Nepal, India and other countries to celebrate their festivals every year, this hill is rich in granite.

Around a month ago, a private company’s diggers arrived with huge machines and dynamite. Residents say the contractor, Abdullah Qureshi, was given control of the hill on lease by the Sindh government. The contractor is busy blasting through huge chunks of the hill at the bottom of the temple to extract granite while the pilgrims watch on in horror.

The three-day Shivratri mela started this year on February 2, except this time the festival was not just about pooja but about protest. “We found that the way leading up to the temple is also destroyed. The hill is being sawed into from all sides, we’re afraid our temple will be damaged,” said Veerjhi Kohli, who lives in Choryo.

Veerjhi explained they cremate their dead and then save the ashes till Shivratri – a sacred day that comes once every year. On this day they scatter the ashes into holy water. While Pakistan’s richer Hindus go to India and release their loved one’s remains into the Ganges, those who cannot afford the trip go to Nagarparkar.

Durga Mata temple is one of the two temples where the Hindus always go and pay their respects on this day, making it a significant part of their religion. According to him, around 200,000 pilgrims flock to the temple for the festival. Although the digging stopped while the mela continued, the pilgrims were dismayed at the project. They organised a protest but “in a place as remote as this, no media came, there was no notice”, said a disappointed Veerjhi. “Only one newspaper picked it up as a small story.”

The residents have had little success so far. The contractors say they have a lease. The mukhtiarkar and DCO say they have no authority. However, an MPA has promised his support. “He said the digging will be stopped,” Veerjhi told The Express Tribune.

Officials have been quick to deny, shift the blame or simply stay quiet. Culture minister Sassui Palijo was in Islamabad so she could not be contacted. However, her department director, Muhammad Ali Manjhi, said they would “never dig around a heritage site”. When pestered about whether such digging was going on, he relented “it is possible” before quickly adding that his department had nothing to do with it. They would only dig and excavate for archaeology purposes.

Tharparkar DCO Shakeel Zaman remained tight-lipped over the issue, refusing to say anything more than “I have asked for a report from the revenue department. I will share details once the report is given.” When will the report come? “I’ve asked them to give it in as soon as possible.”

While officials move the responsibility around, Veerjhi puts it succinctly: “Of all the hills, why this one?”