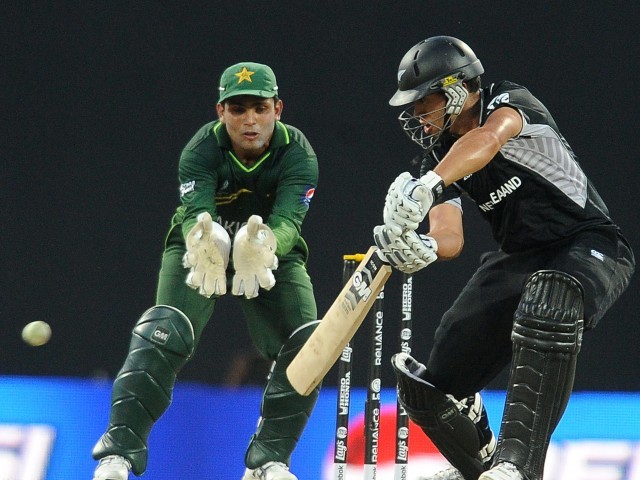 New Zealand batsman Ross Taylor (R) is watched by Pakistan wicketkeeper Kamran Akmal as he plays a shot during the Group A match in the World Cup Cricket tournament between Pakistan and New Zealand. PHOTO: AFP

PALLEKELE: Emotional cricket fans went berserk on Twitter and Facebook, venting their frustration against fumbling wicket-keeper Kamran Akmal and demanding he be dropped from the team.

Taylor went on to hit an unbeaten career-best 131, lifting New Zealand to an imposing 302-7 in the World Cup Group A clash before Pakistan were restricted to 192 all out.

Ex-players took aim at the hapless Kamran. “I only notice when Kamran performs well behind the stumps, bad wicket keeping is routine for him,” a sarcastic Rashid Latif, a former national team wicket-keeper, told AFP.

Another former captain and wicket-keeper Moin Khan blasted team management for keeping faith in Kamran. “It’s wrong to play Kamran consistently after his poor keeping,” said Moin. “When you give so many chances in a World Cup match, you have to pay the price.”

Former captain Imran Khan said Pakistan must move on from the defeat. “Pakistan should learn fast from their mistakes and move on from here, if they don’t it will hurt their campaign.”

Another former paceman Sarfraz Nawaz believed the bowlers were demoralised by the costly lapses. “Once Kamran dropped those catches, the bowlers got demoralised and his poor keeping cost Pakistan the match,” said Nawaz.

Fans also voiced their anger across social forums on cyberspace.

One fan said on Twitter: “Has Shahid Afridi told Kamran that he has dropped the World Cup with two catches?”.

Another Twitter message said: “Kamran thinks being a wicket-keeper means letting the batsman keep his wicket.”

Another fan, Mohammad Parekh, asked: “What do Kamran and Michael Jackson have in common? They both wear gloves for no reason.”

Angry reactions from die-hard fans are common in the sub-continent. The most recent came when the West Indies team bus was stoned after they defeated co-hosts Bangladesh, in an apparent case of mistaken identity.

Former Pakistan captain Wasim Akram received death threats after his team lost the 1996 World Cup quarter-final against India, while angry fans attacked the houses of Indian players following their first round exit from the 2007 World Cup.

Don’t pin all the blame on Kamran, says Waqar