For reason­s right or wrong Pakist­an will likely be in the news as the Trump admini­strati­on settle­s in
By Touqir Hussain
Published: January 18, 2017
Tweet Email 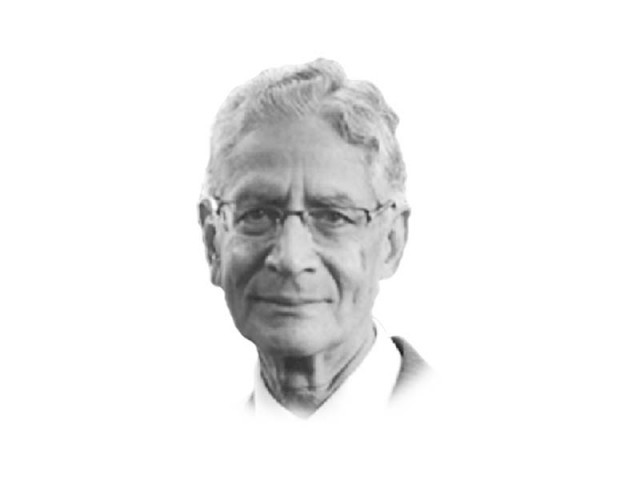 The writer, a former Ambassador; presently teaches at Georgetown and Johns Hopkins University

For reasons right or wrong Pakistan will likely be in the news as the Trump administration settles in. This may lead to an increased focus on US-Pakistan relations in the Pakistan media. To contribute to a good debate I thought I would share with the readers my own modest knowledge of the relationship based on long years of experience as a policy practitioner in Pakistan and now for the past decade as an academic in the US. Indeed a view from both ends in two different roles and from two different perspectives.

Not all relationships end up serving all the interests of any two sides. Yet often in an important relationship there is a larger conceptual framework embracing some commonality of interests and a shared vision that holds good over a period of time. And that helps them to see issues in a larger perspective with a sense of continuity and overcome or manage their differences. But this has not been the case with the US-Pakistan relationship.

In each of their three close alliances: during the early years of the Cold War, the 1980s Afghan Jihad and the post-9/11 war on terrorism, the two countries were allies in one issue and antagonists in another. Each was using the other to advance interests of its own that were not quite compatible with those of the other side. Even on their shared interests their perceptions and policies were not the same. That did not make for an enduring relationship.

Frankly the US-Pakistan relationship has not been a normal one. It has historically been driven by certain politico-military needs of the two countries conducted by a narrow band of leadership at the top assisted by the military and intelligence community. And there has been an underworld of the relationship not fully transparent or accessible to regular diplomats, at least in Pakistan, making it difficult to manage the relationship. Besides, it has not enjoyed a consistent public support in both countries.

All the same the relationship has served some important interests of the two countries over the past six decades. There is no denying the US had strengthened Pakistan’s defence capabilities and potential for economic development that gave critical help in stabilising the emergent state. But that was a long time ago and indeed the last time the US really helped Pakistan. And the only time the relationship enjoyed a broad based public support. The relationship since then has been of a different nature. It has been between Washington and Pakistan’s ruling elite principally the army.

With its capacity enhanced by American patronage and failing politicians providing it space and the excuse, the army became a dominant player in Pakistan’s political life and largely remains so. The army and politicians competed for power, but cooperated in the defence of the ruling elite’s class and institutional interests underpinned by support from external benefactors that became Pakistan’s organising idea.

The US, a principal benefactor, hired the leadership from time to time for the advancement of its strategic interests. And in exchange for its support Pakistan hired Washington for military aid and economic assistance to bankroll poor governance. The US-Pakistan relationship became cliental on both sides and increasingly transactional (and will become more so under Trump). Washington used Pakistan for its own strategic purposes by taking advantage of and indeed playing into its power imbalances and structural weakness, strengthening Pakistan’s flawed body politic, an expediency for which not only America itself but Pakistan also came to pay a high price. And the cost has kept escalating.

In the Ayub era Pakistan’s democracy suffered. And for the US, its relationship with India was hurt. During the Zia period there was further blow to democracy. And the US lost too as Pakistan went on to complete its nuclear programme under the umbrella of the Afghanistan war. And both were losers as their alliance during the Afghan war helped Washington win the Cold War but under the darkening shadow of sinister forces of radicalism that would later come to haunt both the countries.

In essence the relationship has had some serious side effects. That is why there have been reservations about them in both countries among sections of public opinion, political institutions and the strategic community. To overcome that, both sides oversold the relationship. Pakistan erroneously billed it as an alliance against India. And the US disingenuously played up Pakistan value as an ally to gain public support and Congressional approval for the high levels of aid. When the need for close relationship ended Pakistan came under stricter scrutiny by media and Congress and the reality dawned. And then came the sanctions, essentially as a political balancing act. As for Pakistan it could only react with anti-Americanism accusing Washington of all sorts of things fair and unfair.

While the US has often treated Pakistan unfairly, even in a high-handed manner, it must be said that the public grudge against America for not supporting Pakistan against India in 1965 and 1971 is misplaced. A close scrutiny of the US treaty obligations to Pakistan leave no doubt that the historical US commitments were essentially in the context of Communist threat to Pakistan’s security. The US therefore did not really break any treaty commitments by not coming to Pakistan’s help in 1965 and 1971.

What lies ahead for the two countries under the Trump administration? More on it in a later article but for now one can briefly say it depends on what approach he brings to the war on terrorism and to the Afghanistan war. Pakistan’s importance will remain as long as Afghanistan remains unresolved but it will come under increasing pressure to either bring the Taliban to the negotiating table or expel them. With China at its back and the option of developing ties with Russia and Pakistan’s cockiness that it is too dangerous to fail Islamabad has withstood the pressure so far. But for how long?

My advice. Do what is in your national interest. And if you think supporting Haqqani Network and the Afghan Taliban is in your interest, think again. By all means strengthen ties with China but don’t fall from one dependency into another. Relations with both China and the US are important for different reasons. It is an era in global politics where everybody is trying to multiply its relations. Pakistan has great strengths including among others a good professional army and a skilled Foreign Service. Come up with some bold moves to get on board rather than just make statements.