Sharba­t Gula says pictur­e made her 'famous but also led to her impris­onment'
By News Desk
Published: January 19, 2017
Tweet Email 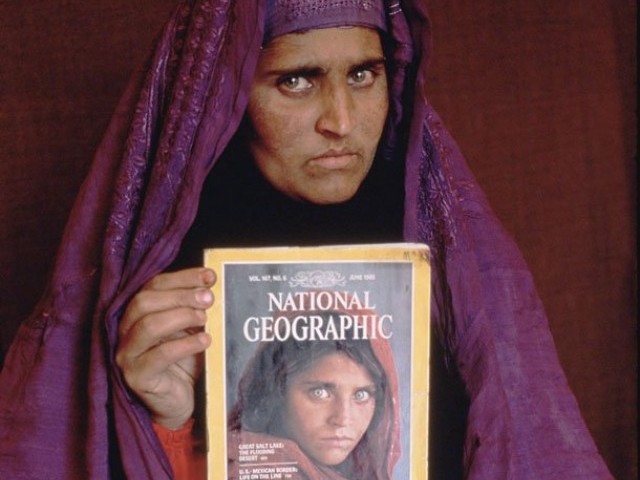 An image of Sharbat Gula holding the cover she was featured in June 1985. PHOTO: STEVE MCCURRY

Sharbat Gula, the green-eyed Afghan woman who appeared on the National Geographic cover in 1984, has said the iconic photo “created more problems than benefits” for her.

The green-eyed ‘Afghan refugee girl’ whose NatGeo picture became a symbol of her country’s wars, told BBC she had mixed feelings about the picture taken of her by Steve McCurry. “The photo created more problems than benefits. It made me famous but also led to my imprisonment,” she said.

She went on to say that she did not like the photo and the media, however, “now I am very happy that it gave me honour and made me popular among people.” Gula said she felt exalted because the income from the photo helped a lot of widows and orphans.

Gula was deported to Afghanistan following her arrest from Peshawar last year over illegally obtaining Pakistani identity documents. Her deportation came after 15 days of imprisonment.

Talking about her life, the Afghan woman said she faced a myriad of hardships as her husband died of hepatitis C and so did her eldest daughter. “I want peace and I pray to God no one is forced to leave their country and become a refugee,” she said.

Delving into the details of her life as a refugee in Pakistan, Gula said she lived for 35 years in Pakistan. “It was a very good life but I did not expect the [Pakistani] government to behave so harshly and put me behind bars.”

Gula expressed her contentment over her repatriation to her homeland, saying she was very happy to have returned to Afghanistan. “President Ashraf Ghani, former president Hamid Karzai and all Afghans helped me,” she said.

Italy quake: up to 30 feared dead in avalanche-hit hotel