It was diffic­ult seeing such a setbac­k to our cultur­e and histor­y, Thabet says
By Reuters
Published: January 17, 2017
Tweet Email 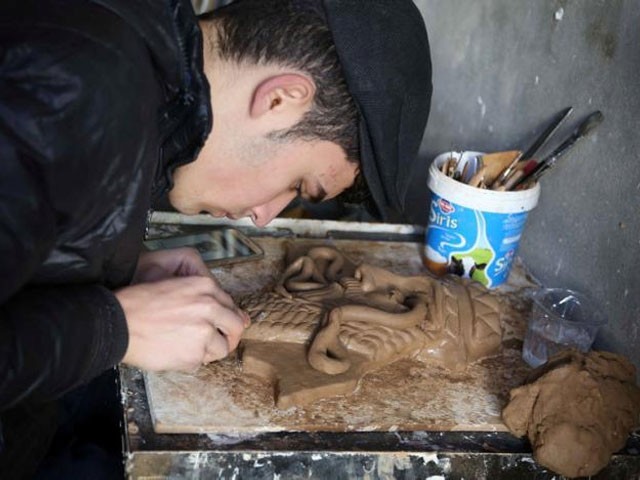 As Iraqi forces fight to retake the northern city of Mosul from Islamic State, an artist in nearby Erbil is chiseling at clay in a tiny, unheated studio to recreate historic Assyrian monuments destroyed by the group.

Ninos Thabet, an 18-year-old Christian who studied art at Mosul University, is creating miniature replicas of statues the jihadists destroyed when they overran the 3,000-year-old Assyrian city of Nimrud, south of Mosul, 2-1/2 years ago. Once the capital of an empire stretching across the ancient Middle East, Nimrud is one of several historic sites that Islamic State looted and ransacked when they seized large swathes of Iraq and neighboring Syria in 2014.

For art lovers: ‘The Marvel that is Khalid Iqbal’ launched

The statues included winged bulls with human faces, known as lamassu, and a bronze head of King Sargon of Akkad. “Seeing the antiquities of your country, a civilization that is thousands of years old, destroyed within minutes is very painful,” he told Reuters during a visit to his studio. “It was difficult seeing such a setback to our culture and history.”

Islamic State, whose ultra-hardline doctrine deems pre-Islamic religious heritage idolatrous, released video footage last year showing its fighters bulldozing, drilling and blowing up murals and statues at Nimrud. “I wanted to send a message to the world saying, ‘We … want to rebuild our civilization and to continue to grow artistically'”, said Thabet.

Iraqi forces pushing through eastern Mosul took control over the weekend of Mosul University, once a premier institution in the Middle East that became a strategic site for the militants, as part of a three-month, U.S.-led offensive to recapture the entire city, Islamic State’s last major stronghold in the country. Western Mosul remains under Islamic State control.

Thabet fled with his family from the Christian town of Qaraqosh, east of Mosul, to the Kurdish capital Erbil when Islamic State took over. He says art brought him comfort while he was away from his home and friends.

Since leaving his home, he has created more than 50 statues and figures. Some of them have been displayed in exhibits and museums, and others he sold to collectors.

Art for change: Art by schoolchildren for a higher purpose

Iraqi troops pushed Islamic State from Nimrud in November, giving officials a clearer idea of the scale of the damage. During a visit days later, Reuters found shattered remains of intricate carvings lying broken in the dust. A ziggurat, or terraced pyramid, had been reduced to a pile of dirt, apparently flattened by bulldozers.

Nimrud was excavated in the 19th century by British archaeologist Austen Layard. Fellow archaeologist Max Mallowan and his wife, crime writer Agatha Christie, worked at Nimrud in the 1950s. Christie’s experiences in Iraq formed the background to several of her novels.