Trump said he would think twice about helpin­g NATO allies if the United States were not "reason­ably reimbu­rsed"
By AFP
Published: January 16, 2017
Tweet Email 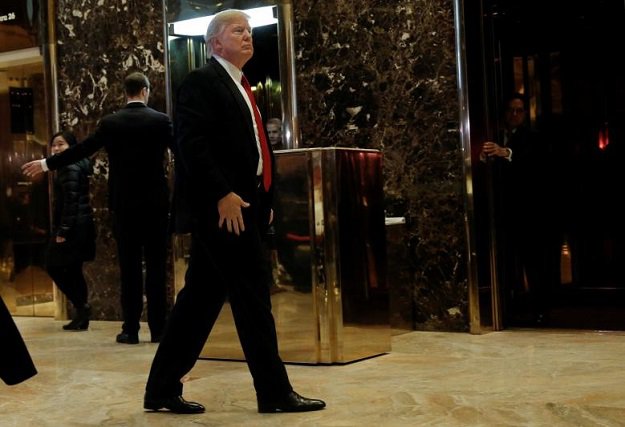 NATO is “obsolete”, Germany’s Angela Merkel made a “catastrophic mistake” on refugees, Brexit will be “great” and the US could cut a deal with Russia: Donald Trump unleashed a volley of broadsides Sunday in interviews with European media.

Five days before his inauguration as the 45th President of the United States, the billionaire populist let loose a torrent of controversial comments about European allies in interviews with British newspaper The Times and Germany’s Bild. He extended a hand to Russia, which has been hit by a string of sanctions under his predecessor Barack Obama over Moscow’s involvement in Ukraine, the Syrian war and for alleged cyber attacks to influence the US election.

“Let’s see if we can make some good deals with Russia,” Trump said in remarks carried by The Times.

The US president-elect suggested a deal in which nuclear arsenals would be reduced and sanctions against Moscow would be eased, but gave no details.

“Russia’s hurting very badly right now because of sanctions, but I think something can happen that a lot of people are gonna benefit,” said the president-elect, who has previously expressed admiration for Russian leader Vladimir Putin.

Washington’s European allies imposed sanctions against Russia over Ukraine in 2014. Those measures were renewed on December 19. In comments set to cause further consternation among eastern European NATO countries nervous about Moscow following Russia’s annexation of Crimea and involvement in Ukraine, Trump said NATO was “obsolete”.

“I said a long time ago that NATO had problems,” Trump told The Times of London and Bild, Germany’s biggest-selling daily.

“Number one, it was obsolete, because it was designed many, many years ago,” he said.

On the campaign trail, Trump said he would think twice about helping NATO allies if the United States were not “reasonably reimbursed” for the costs of defending them.

After Trump’s victory, NATO Secretary General Jens Stoltenberg said the alliance had been a bedrock of transatlantic security for “almost 70 years” and was especially needed at a time of new challenges.

Spending has been a common source of friction within the 28-nation alliance over recent years. The core military contributor to the alliance is the United States, which accounts for about 70 percent of spending.

In 2014, stung into action by Russia’s intervention in Ukraine, upheaval in the Middle East and North Africa, NATO leaders agreed to reverse years of defence cuts and devote the equivalent of two percent of economic output to defence.

“There’s five countries that are paying what they’re supposed to. Five. It’s not much.”

In other remarks, Trump said Brexit “is going to end up as a great thing” and said he backed a trade deal with post-EU Britain, which would be “good for both sides.”

“We’re gonna work very hard to get it done quickly and done properly,” said Trump, confirming he will meet British Prime Minister Theresa May soon after his inauguration on January 20. The pound took a hit Monday in early Asian trade after Britain said it might undercut the EU economically if it cannot obtain both single market access and immigration controls, with British media warning of a so-called “hard Brexit”.

“Other countries will leave” the European Union in future, Trump prophesied, largely due to the pressure the bloc was put under following a significant uptick in migrants and refugees arriving.

“If they hadn’t been forced to take in all of the refugees, so many, with all the problems that it… entails, I think that you wouldn’t have a Brexit. This was the final straw that broke the camel’s back,” he said. Trump also criticised Merkel for letting Germany admit undocumented migrants enter the country, insinuating that this posed a security risk.

Merkel took flak at home after her open-door policy aimed at desperate Syrian refugees brought 890,000 asylum seekers to Europe’s biggest economy in 2015, contributing to the rise of an anti-migrant movement.

But in 2016, that figure dropped back sharply, to 280,000 arrivals the government said last Wednesday