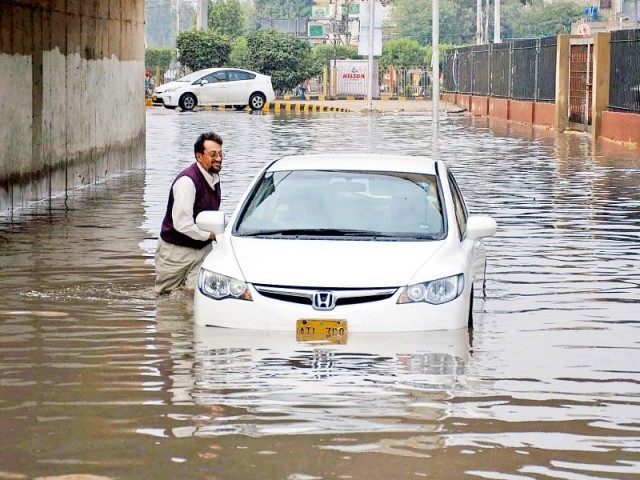 PESHAWAR / KARACHI / ISLAMABAD: Pakistan began counting the cost of a cold snap sweeping across the country as the first winter showers in Karachi swamped roads, thoroughfares and streets, leading to massive traffic snarls on Saturday.

The country’s mountainous regions received fresh snowfall as people endured the below-freezing temperatures. Weather forecasts have predicted a further plunge in temperatures with more rains and snowfall in the country.

On Saturday, the lowest temperatures ranged between -14°C in Skardu and -2°C in Chilas, according to the Pakistan Meteorological Department (PMD). The inclement weather claimed at least 12 lives – half of them in Karachi alone.

It’s raining in Karachi and no one can handle it

The first winter showers in Karachi, which started on Friday and continued intermittently overnight, brought down the temperatures by three degrees Celsius below normal on Saturday.

Due to the inadequate civic facilities and choked drains, the rainwater swamped the roads and streets, bringing the teeming city to a grinding halt. At least six people died of electrocution due to snapped wires and in road accidents.

Balochistan received its first snowfall of the season, dropping the temperature to -3°C in Zhob. Rain with snowfall was also reported in Chagai, Qilla Abdullah, Chaman and other areas of the province.

The PMD predicted that the westerly wave, affecting Balochistan and Sindh, is expected to grip upper parts of the country and is likely to persist till Wednesday. More snowfall is expected in Khyber-Pakhtunkhwa, Kashmir, Gilgit-Baltistan and Fata today (Sunday).

PMD’s Director General Dr Ghulam Rasul said the winter season, which started in Pakistan a little late, is expected to last till mid-February. “The ongoing spell of rain and snowfall will further bring down the temperatures. And another spell of rain is expected by the end of this month,” he told The Express Tribune.

He added that the current spell would help Pakistan meet its water requirements for the winter crop.

Most deaths were reported in Karachi where six people were killed in rain-related incidents. Another nine people were wounded. Elsewhere, four people died in Khyber Agency and Chitral district.

“We fear the number of children suffering from pneumonia may go up if the cold snap persists in the area,” he said adding that more than 30 children have already been hospitalised.

Hundreds of vehicles were stranded at the Lowari Tunnel after heavy snowfall battered Chitral. “At least 1,800 vehicles were stranded on both sides of the tunnel for the past 48 hours. Two infants died in the harsh weather conditions where the temperature had dropped to -10°C during the day and –20°C in the night,” Jamaat-e-Islami’s local leader  Mulana Sher Aziz said .

Army troops cleared the Lowari Top for vehicular traffic later in the day. “Road blockage caused due to snow at the Lowari Tunnel was cleared and all stranded passengers and light vehicles passed the 9-km-long tunnel, connecting Chitral with the rest of the country.

In Punjab, Fort Munro was blanketed in white as the area received its first snowfall of the season. The hilly resort in the mountainous Sulaiman Range and Anari Hills witnessed intermittent snowfall.

A large number of people from Dera Ghazi Khan, Muzaffargarh, Rajanpur, Multan, Bahawalpur and adjacent areas thronged Fort Munro to enjoy the snowfall. Since the snow started falling on Friday night, residents remained without electricity and water for over 18 hours.

“Pakistan continues to bear the brunt of climate change effects due to which the winter season is now shrinking and the summer season is prolonging,” said Ghulam Rasul.

He warned of a more abrupt change in climate later in the year, suggesting there would only be a brief spring before the onset of an unusually early summer.

“Due to prolonged summers, Pakistan will become more vulnerable to intense heat waves, and urban areas will be at high risk,” he said, adding that the spring season would soon be eliminated.

“The shrinking of winters and prolonged summers will have a direct impact on the availability and use of water in the country,” he warned. “In the summer, the need for water rises automatically, therefore the longer the season lasts, the more water will be required to meet needs,” he said.