The CTO added that extra traffi­c warden­s had been depute­d at the hill statio­n to manage the flow of traffi­c
By Our Correspondent / Photo: Muhammad Javaid
Published: January 15, 2017
Tweet Email 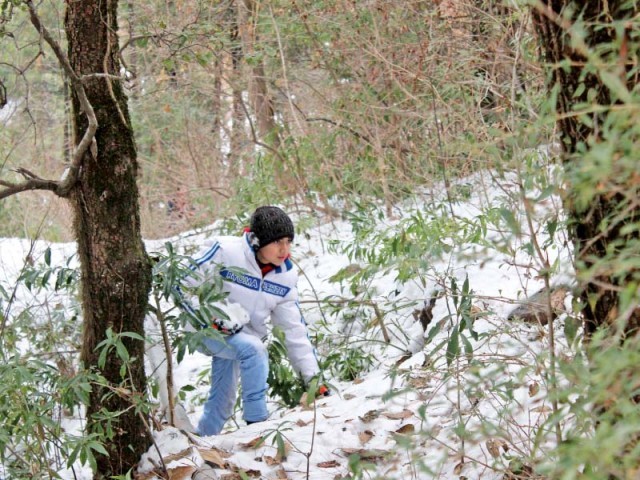 A boy walks in snow in Murree. PHOTO: MUHAMMAD JAVED/EXPRESS

RAWALPINDI: The Rawalpindi traffic police on Saturday urged people, planning to visit Murree over the weekend, not to use  motorcycles or large buses as the roads were too slippery.

Moreover, they warned that inclement weather conditions  could further create problems for them.

In an advisory released on Saturday, Chief Traffic Officer Yousaf Ali Shahid said that visitors should not use motorbikes or large big coasters and buses to visit the hill station, explaining that the slippery roads would create problems for these vehicles.

He further advised visitors to keep air pressure in their tyres low and to keep the fuel tanks topped up. Moreover, he advised them to have a functioning and charged car battery, and to ensure that their vehicles are mechanically fit.

Drivers were advised not to park their vehicles on  roadsides which could lead to traffic congestion.

The CTO added that extra traffic wardens had been deputed at the hill station to manage the flow of traffic.

Meanwhile, Wajid Satti, a spokesperson for City Traffic Police, said that around 20,000 vehicles had already reached Murree till Saturday evening while more vehicles were expected on Sunday. Last week, over 30,000 vehicles visited the hill station.