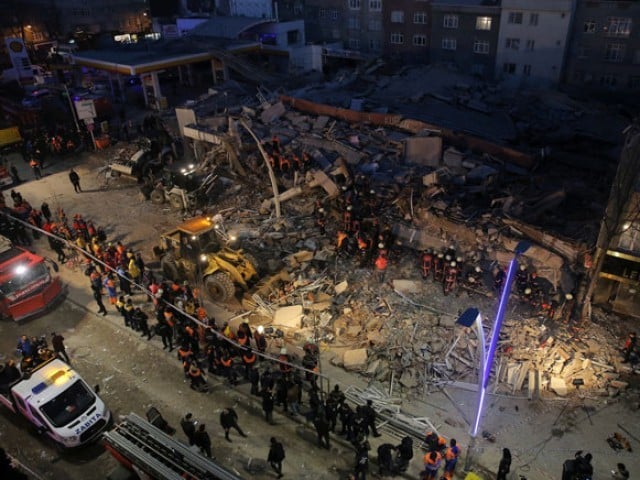 Firemen and rescue workers stand on the wreckage of a building that collapsed and caused several casualities, according to local media, in Istanbul, Turkey, January 13, 2017. PHOTO: REUTERS

Pictures showed the empty building in the working class area of Zeytinburnu on the European side of Turkey’s most populous city had crumbled completely, leaving just rubble and dust. 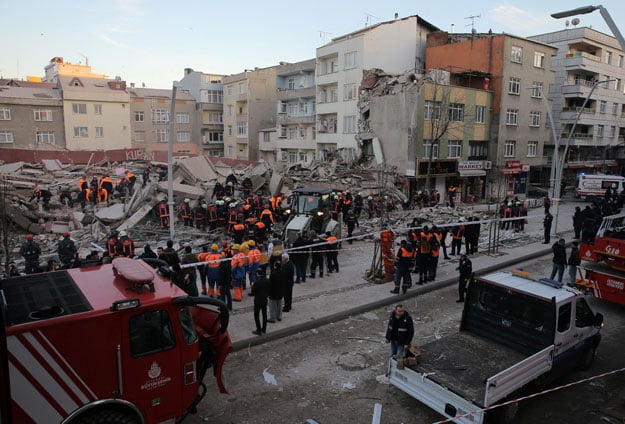 Firemen and rescue workers stand on the wreckage of a building that collapsed and caused several casualities, according to local media, in Istanbul, Turkey, January 13, 2017. PHOTO: REUTERS

Private broadcaster NTV said the building had been constructed in 1992 and emptied in 2015, leaving no residents. No reason was given for why it was emptied.

Local officials said other buildings nearby were evacuated on safety grounds after the collapse.

The dead child’s twin sibling was among at least five other injured.

Several ambulances were dispatched to the scene, NTV said, while rescue workers with sniffer dogs sifted through the wreckage to ensure no person was trapped.

“We need to learn a lesson from this building,” Zeytinburnu Mayor Murat Aydin was quoted as saying by NTV. “Most buildings constructed before 2000 are decaying,” he added.

Municipal officials openly admit Istanbul is dotted with buildings that are not earthquake proof and prone to collapse, with numerous campaigns set up to encourage responsible construction.

The city lies in a major earthquake-prone zone and a quake in 1999 outside the city left 17,000 dead.