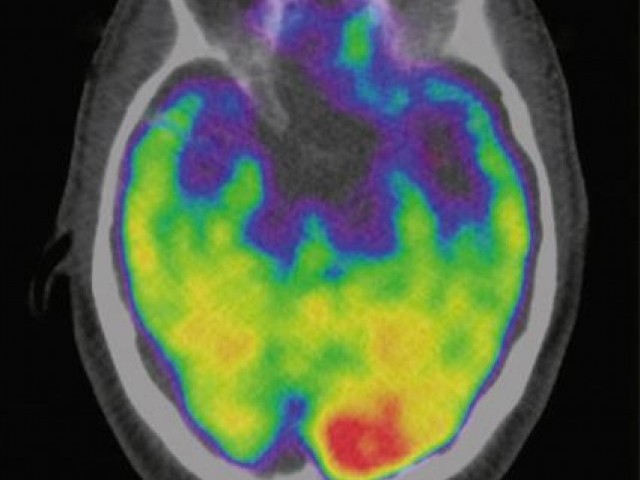 A scan of a brain used in a study carried out by Massachusetts General Hospital and Harvard Medical School which associates the brain region called the amygdala, an area linked to stress, to greater risk of heart disease and stroke is seen in an undated image released January 11, 2017 by The Lancet which published the reasearch. PHOTO: REUTERS

LONDON: People with heightened activity in the amygdala, an area of the brain linked to stress, may be at greater risk of heart disease and stroke, scientists said on Thursday in research that could lead to new ways to treat stress-related heart problems.

Publishing their work in The Lancet medical journal, the researchers said the stress signaled in the amygdala is also linked to increased bone marrow activity and to inflammation in the arteries, which can cause heart attack and stroke.

Exploring the links, the scientists said a plausible biological mechanism could be that the amygdala triggers the bone marrow to produce extra white blood cells, which then cause the arteries to develop plaques and become inflamed.

“Our results provide a unique insight into how stress may lead to cardiovascular disease,” said Ahmed Tawakol of Massachusetts General Hospital and Harvard Medical School in the United States, who led the study. “This raises the possibility that reducing stress could produce benefits that extend beyond an improved sense of psychological wellbeing.” 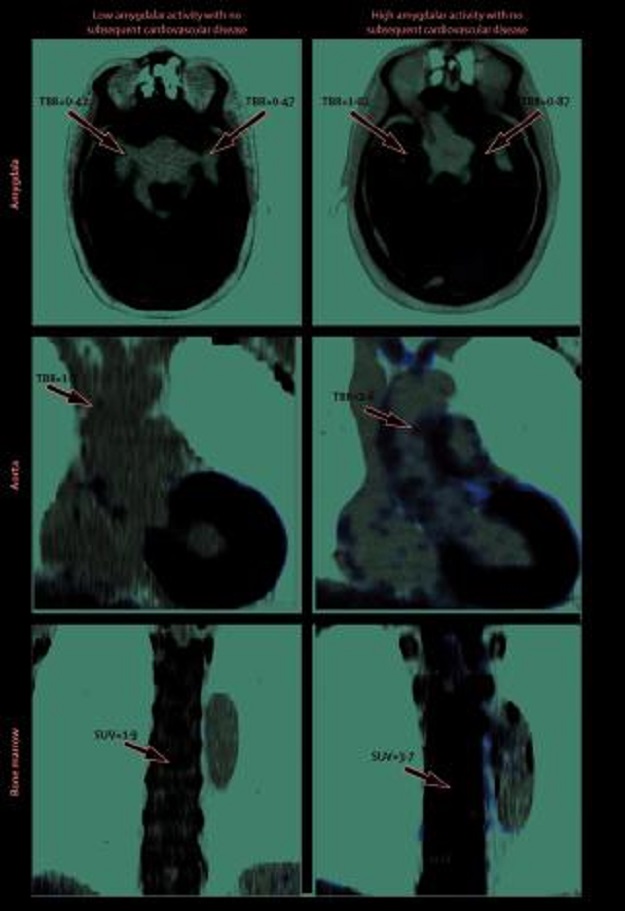 Scans a brain, bone and artery used in a study carried out by Massachusetts General Hospital and Harvard Medical School which associates the brain region called the amygdala, an area linked to stress, to greater risk of heart disease and stroke are seen in an undated image released January 11, 2017 by The Lancet which published the reasearch. The Lancet Handout via REUTERS

Smoking, high blood pressure and diabetes are well- established risk factors for heart disease, and anecdotal evidence has pointed to chronic stress as another possible risk.

Studies in animals have previously found a link between stress and higher activity in bone marrow and arteries, but until now scientists were unsure if this was the case in people.

Other research has found the amygdala is more active in people with post-traumatic stress disorder, anxiety and depression. But before this study, none had found the region of the brain that links stress to heart attack and stroke risk. In this research, scientists gave 293 patients brain and body scans to record their brain, bone marrow and spleen activity and inflammation of their arteries.

The patients were then tracked for an average of 3.7 years to see if they developed heart disease. In this time 22 patients had cardiovascular events – including heart attack, angina, heart failure, stroke and peripheral arterial disease.

Emily Reeve, a cardiac nurse at the British Heart Foundation charity, said the study’s findings should lead to better understanding of how to prevent heart disease. “The link between stress and increased risk of developing heart disease has previously focused on the lifestyle habits people take up when they feel stressed such as smoking, drinking…and overeating,” she said.

“Exploring the brain’s management of stress and discovering why it increases the risk of heart disease will allow us to develop new ways of managing chronic psychological stress,” she added.