The techni­que seems cruel, but its propon­ents say it is more humane than allowi­ng a fish to thrash about until it dies
By AFP
Published: January 11, 2017
Tweet Email 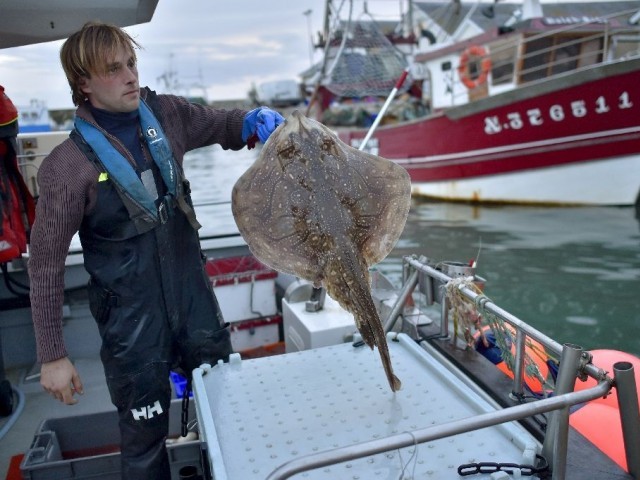 French fisherman Daniel Kerdavid prepares to kill a ray according to the Japanese technique 'Ikijime', onboard his boat Miyabi in Quiberon, Brittany PHOTO: AFP

QUIBERON: At first glance, apart from a telltale little hole between its eyes, the inert fish looks like any other dead whiting. But its flesh is much tastier thanks to the ancient Japanese method by which it was slaughtered: ikejime, also known as spiking.

Practised for centuries in Japan, the technique has been adopted only recently in France, and 30-year-old Brittany fisherman Daniel Kerdavid is one of only a handful of French purveyors of ikejime-slaughtered fish.

The use of ikejime “completely changes the taste and texture of the fish,” says Bourdon, who serves up pearly white pollock with caramelised carrots at the Petit Hotel du Grand Large restaurant in the seaside Brittany town of Saint-Pierre-Quiberon.

“You can feel the muscle,” he told AFP. “I don’t know if you can imagine the result, something both firm and tender, and it also preserves the original colours of the fish. It’s pretty extraordinary.”

Adopting the technique has enabled Kerdavid to double his prices – he now charges an average of eight euros (dollars) a kilo for his whiting.

But Bourdon says he is not bothered by the expense: “What I’m interested in is quality.”

And Kerdavid is not looking back: “All my fish have already been sold,” he says.

Another Michelin-starred chef Kerdavid has reeled in is Christopher Hache of the restaurant Les Ambassadeurs at the storied Hotel de Crillon in Paris.

As the majestic hotel undergoes extensive renovations, Hache is on a global mission scouting for techniques and ingredients used by other top chefs – which turned him into a fan of the ikejime method, Kerdavid says.

Donning rubber boots and waterproof overalls, Kerdavid sets sail before dawn from the port of Quiberon on a quest for whiting, pollock and other fish around the island of Belle-Ile.

Each fish he hauls aboard his nine-metre (30-foot) boat – named Miyabi after the hook that is the main tool of his trade – meets a sharp, swift fate.

With disconcerting self-assurance, Kerdavid sinks a miyabi between the fish’s eyes, then pushes a steel spike through the hole into the brain, slicing through arteries as it goes.

The blood drains from the fish’s body into a bin filled with ice water.

The technique destroys the fish’s nervous system including the spinal cord in a few seconds while the heart continues to beat.

“The fish is still alive. Its internal organs continue to function, especially the heart, which will empty out all the blood,” says Kerdavid, who has never set foot in Japan but learned the technique by watching video clips online.

“The blood is the main cause of the fish’s deterioration,” he says.

Not only is the flesh tastier with all the blood drained from it, but the fish has a longer storage life.

Not left to thrash about

The technique may seem cruel, but its proponents say it is more humane than allowing a fish to thrash about until it dies.

“I kill the fish, I don’t leave them to die,” Kerdavid says. “From the moment I pull my hook from the fish it feels no more pain.”

Kerdavid’s haul for the day weighs 91 kilogrammes. The more fragile fish, such as whiting and pollock, are killed onboard.

Others such as conger eels, sea bream, rays or smooth-hound sharks are brought ashore to be killed after being kept alive in tanks.

As interest in ikejime-slaughtered fish grows among French chefs, Kerdavid wants to branch out, and is now looking into using the technique to kill lobsters as an alternative to boiling the animals alive.

Kerdavid has only two competitors in France, fish wholesaler France Ikejime and Damien Muller, a Corsican fisherman who uses ikejime to slaughter his bluefin tuna and swordfish.