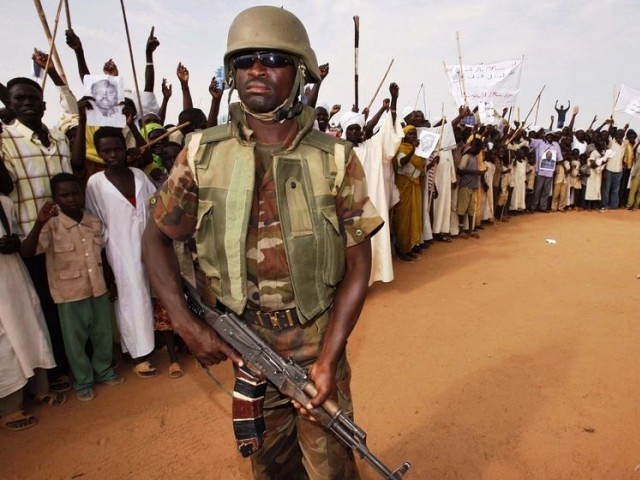 A weekend attack which killed 10 African Union peacekeepers has highlighted just how ineffective the force is. PHOTO:AFP

“There was fighting on Sunday between the SPLA and a former militia group under Ulony, a militia commander who had been in the service of Khartoum for a long time,” the spokesman for the Sudan People’s Liberation Army told reporters.

The militiamen attacked a group of SPLA soldiers who had gone to the market in Owach, a town west of Upper Nile’s state capital Malakal, killing one and wounding one, Aguer said.

“After that incident, the SPLA attacked their camp at around 12:00 pm, and fighting took place in which 37 of Ulony’s men and seven SPLA soldiers were killed, including the one that died earlier,” he said, adding that another 28 soldiers were wounded.

Sources in Malakal confirmed that there had been fighting in Owach, but disputed the casualty figure given by Aguer.

Aguer said the army had recovered 37 AK-47 assault rifles, which had “definitely” been supplied by the north.

Northern army officials were not available to respond to the accusations.

Relations between north and south Sudan seemed to have improved during January’s referendum on southern independence, but a string of deadly attacks by rebel militias in Upper Nile and neighbouring Jonglei state since last month has sparked a war of words between the two sides.

In the worst incident, more than 200 people died in an attack on SPLA soldiers by troops loyal to renegade southern general George Athor in northern Jonglei on February 9.

Juba has accused the rebels of acting on behalf of Khartoum in an attempt to destabilise the south, a charge northern officials have denied.