How about just ‘sparing the rod’

How about just ‘sparing the rod’

Incide­nts of studen­ts being abused and assaul­ted in school seem to be on the rise throug­hout Punjab. In...
By Maria Amir
Published: May 13, 2010
Tweet Email 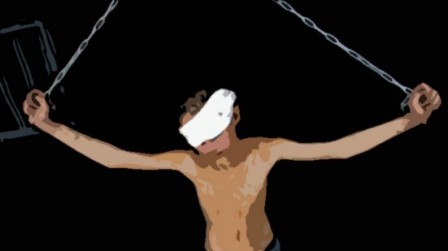 A 2005 UN Report states that most children at schools across Pakistan are beaten.

GUJRANWALA/SIALKOT/MULTAN: Incidents of students being abused and assaulted in school seem to be on the rise throughout Punjab.

In Gujranwala, a student was flogged with a cricket bat by his teacher, who found him standing outside the classroom while monitoring the halls. On a court’s orders, seven-year-old Nadir Jamal’s medical examination was conducted and the examination confirmed that the child had been flogged. Similarly in the government elementary school in Jugna, a fourth grade student, 12-yearold Amir Sohail was beaten up by his teacher with a stick for asking an ‘impertinent’ question.

The teacher, Javed, admitted that he had ‘disciplined’ the boy after he had continued to ask questions in class once the teacher had said that there would be no more questions and the students had to start copying material into their notebooks. The judicial magistrate ordered the DHQ hospital MS to examine the boy. Amir’s father has submitted an application to Jinnah road police to file an FIR against Javed. On May 8, 2010, a teacher in Multan violently beat six eighth graders with a stick until their parents protested. Riaz Hussain, the father of a student Husnain, filed an application with the local police against a teacher for allegedly torturing his son for not learning an Arabic lesson by heart.

On May 7, 2010, a mother of three visually and hearing impaired children in Gujranwala alleged that her oldest child was assaulted and all three were being ‘forcefully expelled’ from school. Sughran Bibi, who works as a domestic helper in Lohianwala enrolled her children in a school for special children in Aroop Town. Sughran stated that her 13-year-old son had returned home with a gaping, bleeding wound on his forehead. Awais told her, with gestures, that the teachers often shoved and slapped him as well as his seven-year-old brother Khalid.

Infuriated, Sughran approached the principal the next morning to be told that she should find her children odd jobs as they were not ‘worth educating’. On April 18, 2010, a government schoolteacher in Sialkot broke the arm of a seventh-grader for not washing his teacup ‘properly’. Schoolteachers, especially but not exclusively in Punjab, seem to have taken the expression ‘spare the rod, spoil the child’ a tad too seriously. Punjab banned corporal punishment in primary schools in 2000.

However, these measures still await effective implementation in schools throughout the province. According to Abdul Akbar, a teacher at a boy’s private school in Hayatabad said that “A teacher needs to ensure obedience and ensure children receive proper guidance. For this, an occasional light beating or other physical admonishment is necessary. In fact it is the most effective method of teaching.” A report by the UN children’s educational fund (Unicef) in collaboration with Save the Children and the Pakistan government released in 2005 stated, “Most children at schools across the country, both girls and boys, are beaten.

The law has usually overlooked parents or guardians, including teachers, beating their child in ‘good intent’. According to the report, this prevented police from acting on complaints of physical abuse. It was also a matter of attitude as most teachers felt they needed to beat children to teach them. However, with recent legislation banning corporal punishment in schools, public and private, police is encouraged to take action against perpetrators in schools.” According to Human Rights Commission of Pakistan (HRCP) chairwoman Asma Jahangir, “Incidents of corporal punishment in school are detrimental to the country’s academic environment.”

Jahangir has said that the only way to effectively wipe out this culture is for police officials to regularly arrest teachers violating the law. The HRCP chairperson said that students were beaten up over ‘petty issues’ at government schools and were threatened with expulsion in case their parents raised the issue with the administration.