ISLAMABAD: The capital gives an appearance of calm and serenity but lurking just beneath this  veneer is a relatively violent city which witnessed almost a 100 murders in the past year.

Islamabad, a territory with a population of just over two million, saw 96 murders in 2016, with 11 of these coming in December alone.

Some of the most prominent cases included the murder of  Barrister Fahad Malik who was gunned down in F-10/3 in the early hours of August 15. Raja Arshad Mehmood, the prime suspect in the case, was finally arrested by the Federal Investigation Agency at the Torkham border while attempting to cross over into Afghanistan later that month.

Mehmood and two other suspects have been behind bars ever since.

Police, however, say there has been a significant decline in murders when compared to previous years. According to police records, 2014 was far more violent with 152 murder cases reported. This fell to 115 in 2015 before falling to just 96 in 2016.

Officials point towards improved policing and enhanced capability to solve cases in the capital which has helped bring down the crime rate. In this regard, they say they solved at least 23 murder cases in 2016 year and submitted the charge-sheets in courts. This was further due to the establishment of a specialised homicide investigation unit that the police set up in October.

There have also been dozens of attempted murder cases in 2016. 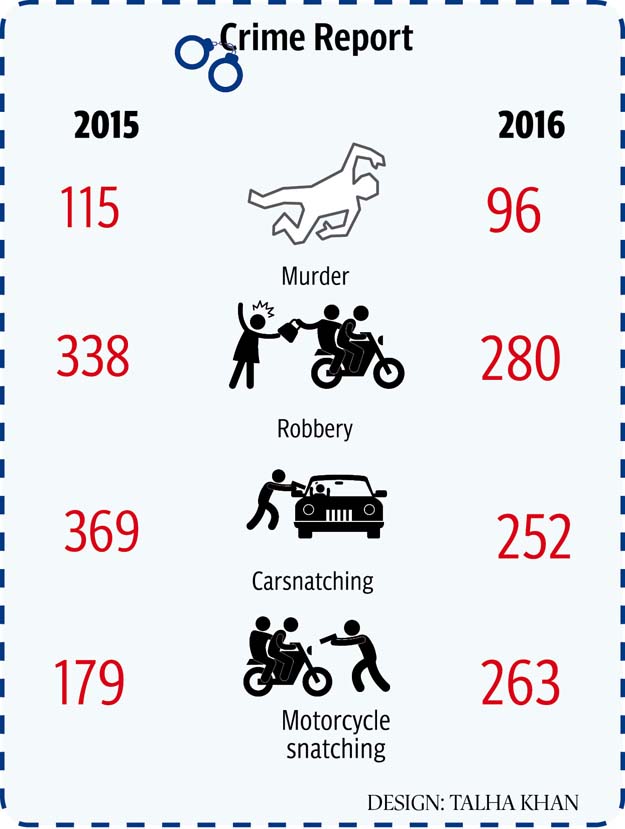 Apart from murderers, car thieves continued to dodge also continued unbridled in 2016. At least 252 cars and 179 motorcycles were stolen from across the capital last year.

Police say they busted over 200 gangs of robbers, burglars and street criminals in 2016 and also arrested 67 people suspected of being involved in auto theft cases.

The police, along with security agencies, carried out scores of search operations across the capital, particularly ahead of the planned November 2 sit-in of Pakistan Tehreek-e-Insaf.

During these search operations, 3,164 proclaimed offenders and 778 absconders were nabbed.

Similarly, 726 people carrying unlicenced guns were caught. Another 629 people were held with narcotics. A total of 232kg of hashish, two kg of opium, and 55,014 bottles of liquor were seized in 2016.

Overall, police say crime rate has been reduced by 25 per cent in 2016 compared to the last year. However, these figures only show the cases which were reported to police and since not all criminal cases are reported to the police, actual number of incidents may be higher.

Political upheavals of a tumultuous year