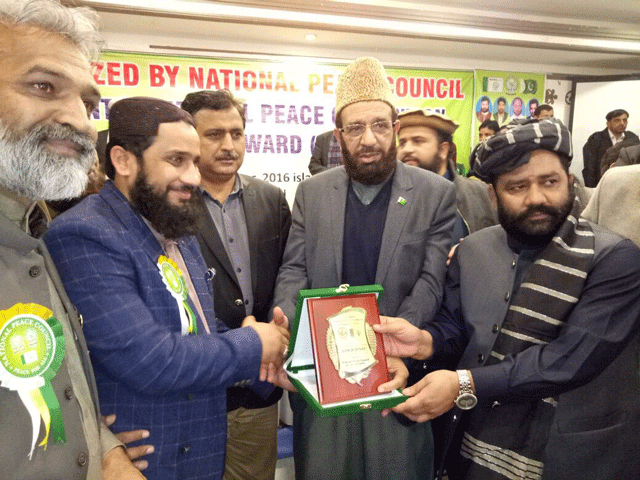 Federal Minister for Religious Affairs Sardar Muhammad Yusuf conferred the ‘peace award’ to Jhangvi during a gathering of the National Peace Council in Islamabad.

The development comes weeks after Jhangvi became member of the Punjab assembly after winning the PP-78 Jhang by-election. He defeated his Pakistan Muslim League-Nawaz (PML-N) rival candidate Haji Azad Nasir Ansari by a margin of close to 13,000 votes.

Masroor Nawaz Jhangvi confesses sectarianism in his past

Jhangvi’s December election to the provincial assembly caused a stir in the country due to fears his political ascent would increase sectarian divides in the dusty town of Jhang with a history of violence between Shia and Sunni communities.

During a recent interview with Reuters, Jhangvi said he has become more moderate and distanced himself from his previous anti-Shia rhetoric after winning a seat in provincial assembly. “I consider everybody to be human, and I want peace in Jhang and in Punjab,” Jhangvi said, when asked how he felt about Shias.

Jhangvi’s assassinated father, Haq Nawaz Jhangvi, was a fierce anti-Shia cleric who founded a feared Sunni sectarian group, Sipah-e-Sahaba Pakistan. He was killed by suspected Shia militants in 1990. The banned militant group Lashkar-e-Jhangvi (LeJ), which has carried out some of the worst sectarian attacks in the country’s history, was named after his father. The group’s Urdu-language name means Army of Jhangvi.