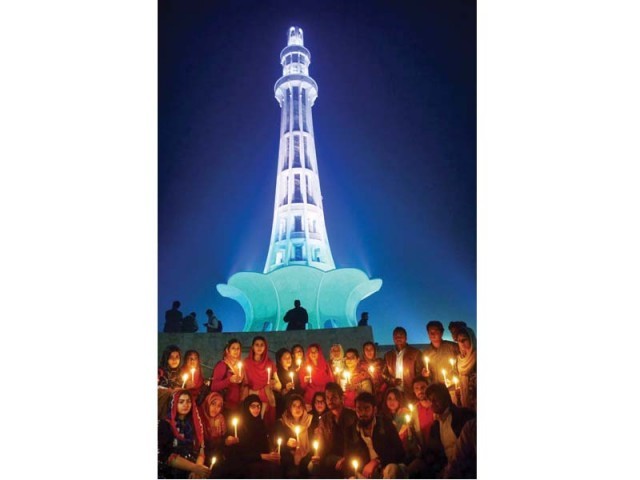 A monument was installed at Minar-e-Pakistan for the APS martyrs. PHOTO: ONLINE

LAHORE: Civil society members, students, teachers and residents of Lahore mourned the loss of lives of the students of Army Public School, Peshawar on the 2nd anniversary of the tragedy with candlelight vigils, walks, seminars and prayer ceremonies.

A vigil was held at Chairing Cross by the city district government, where participants paid rich tribute to the martyrs of the December 16, 2014 massacre.

In his message, Punjab Chief Minister Shahbaz Sharif said children of the APS Peshawar wrote history of bravery and valor on the day. “The entire nation is proud of the history written by APS students for a peaceful and safer Pakistan.” He said. “December 16 will always remind us of the supreme sacrifices of APS martyrs and the nation can never forget their sacrifices.”

A prayer ceremony was held at the Lahore College for Women University by staff members for the martyrs of Peshawar tragedy.

Speakers said the attack on schoolchildren in Peshawar could not be described in words and every Pakistani felt the loss of the parents who lost their innocent loved ones in the attack.

They said Pakistan was going through a testing time and unity was the need of the hour to defeat the evil of terrorism.

Students of the University of Engineering and Technology also held a walk to mark the day at the Kala Shah Kaku Campus.

The students and faculty members of Government College University participated in an on-campus walk to pay homage to the martyrs.

A large number of students and faculty members turned up to remember the tragedy and its victims. The students held banners and placards expressing solidarity with the  victims.

The Child Rights Forum also held a vigil to remember the APS martyrs. The participants lit candles and released sky lanterns to express solidarity with the victims.

A memorial for the martyrs was set up at Minar-e-Pakistan to pay tribute to the martyrs.

Lahore Corps Commander Lt Gen Sadiq Ali participated in a candlelit vigil and a prayer ceremony at the memorial.