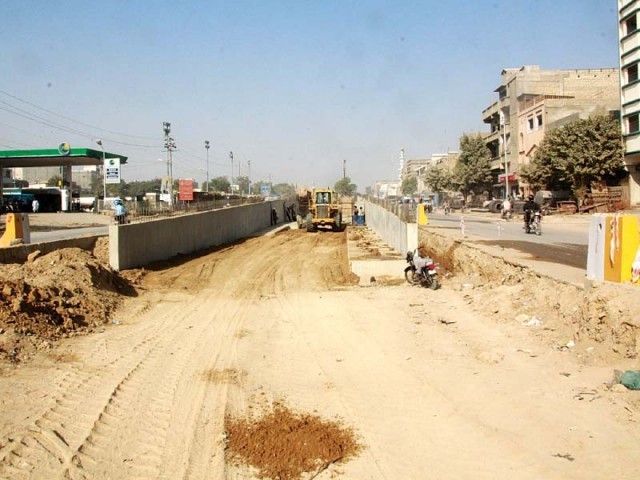 A view of the Orange Line BRT, which is currently under construction. It was named as ‘Abdul Sattar Edhi Line’ on Tuesday. PHOTO: ATHAR KHAN/EXPRESS

KARACHI: The Sindh government renamed on Tuesday an under-construction mass transit system after late philanthropist Abdul Sattar Edhi in recognition of his services to humanity.

The Orange Line Bus Rapid Transit (BRT) was named as ‘Abdul Sattar Edhi Line’ by the provincial transport minister, Nasir Hussain Shah, in a ceremony at the Matric Board Office interchange on Tuesday.

Edhi Foundation head and son of Edhi, Faisal Edhi, was also present on the occasion. He expressed gratitude to the provincial government for paying tribute to his father.

Orange is the new BRT

According to the transport minister, the move was taken on the directives of Pakistan Peoples Party chairperson Bilawal Bhutto-Zardari to honour Edhi for the rescue, relief and welfare network that he [Edhi] established across the country and offshore.

It will run from Orangi Town to the Board Office, from where it will join the Green Line BRT, which is also under construction, through a rotary flyover.

The 3.9-kilometre-long project costs Rs1.14 billion and has been funded by the provincial authorities.