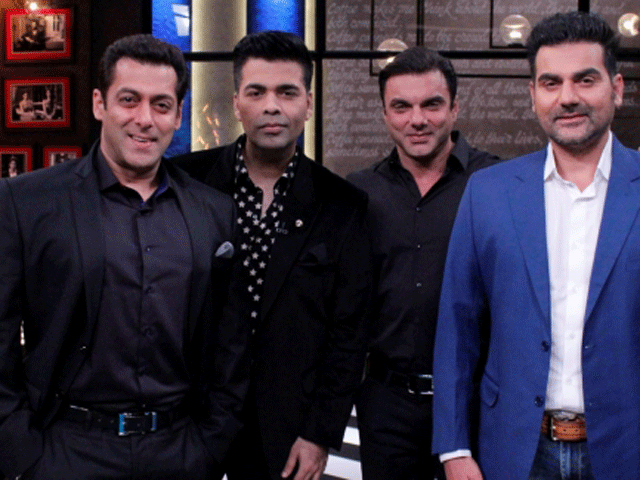 Khan brothers Sohail, Arbaaz and Salman graced the couch at Koffee with Karan season 5 and what ensued was a much-anticipated laugh riot.

With all the jibber-jabber, the Khan trio made some incredibly awkward revelations about their personal and family life. Here’s a fun list of what went down.

1.When Salman  lied about his virginity, yet again. Followed by Arbaaz sharing that Salman, the self-proclaimed virgin, can’t stay away from sex for a month.

2. Arbaaz and Sohail revealing that Salman’s superstar status is the only reason they remain close to him.

3. When Salman became way too comfortable and revealed that the three brothers even used to share each other’s underwear.

4. Salman mistakenly calling his brothers married and the freshly-divorced Arbaaz throwing a shade at him.

5. When Sohail and Salman made this incredibly similar remark.

6. Salman confessing he’s not a good person in relationships and Arbaaz taking a dig at him.

7. Salman intervening in a question for Sohail on rating actresses and mentioning Katrina for all the options.

8. Salman leaving us in splits while re-enacting Katrina’s dance moves.

Will @BeingSalmanKhan pull off Katrina’s moves better than her? Find out tonight, on #KoffeeWithSalman! pic.twitter.com/PjxKkthn2A

Koffee with Karan 5 teaser will leave you begging for more

9. KJo having to tweak the “kill, marry, hook-up” question to “marry, hook-up, befriend” because of Salman’s hit-and- run case.

10. Sohail revealing he abducted a priest when he eloped

One thing is sure – the craziness RUNS in the family! #KoffeeWithSalman pic.twitter.com/mm4Ty9JJVt