The intern­et is just a new means to the age-old dance of attrac­tion and love.
By Reuters
Published: March 1, 2011
Tweet Email 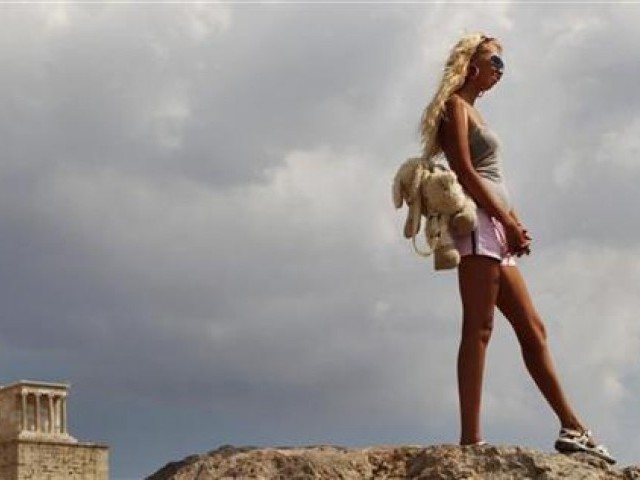 A tourist poses below the hill of the Acropolis with the ancient temple of Athena Nike in the background in Athens September 7, 2010. PHOTO: REUTERS

LONDON: The home of Socrates, Plato and Aristotle is the “most flirtatious city” of the modern world, a new study showed on Monday.

Athens is topped as “World Flirtation League,” which ranked cities by the number of online flirtations initiated per month by the average user in each on online social networking site Badoo.com

Moscow came second, while Rome placed eighth and Madrid 31st, Paris 38th, London 57th, Berlin 79th, and New York 89th in the study of nearly 200 cities across the world in which Badoo analyzed 12 million flirtatious contacts made during a month, with 108 million users chatting and flirting in 180 countries.

The Lonely Planet Encounter Guide to Athens author Victoria Kyriakopoulous said the results are hardly surprising as the Greek capital is a seductive city, with a hedonistic lifestyle.

“Athenians love to party and they love to talk,” she said. “Flirting and sexual banter are not just a means to an end but part of social interaction.”

She said the internet is just a new means to the age-old dance of attraction and love.

Tunis, birthplace of the “Jasmine Revolution,” is among three Arab cities with Kuwait and Beirut to make the world top 10, along with three former Soviet ones, Moscow, Kiev and Baku in Azerbaijan, and three Italian, Turin, Rome and Bari.

Plato said “Love is a serious mental disease.” The great man never shared his views on online flirting but he knew something at least about offline flirting, said Simon Hardy, British academic and author of “The Greeks, Eroticism and Ourselves.”

“It is probably fair to say that the Athenians perfected the art of flirtation in ancient times, especially at the time of symposia described by Plato.”