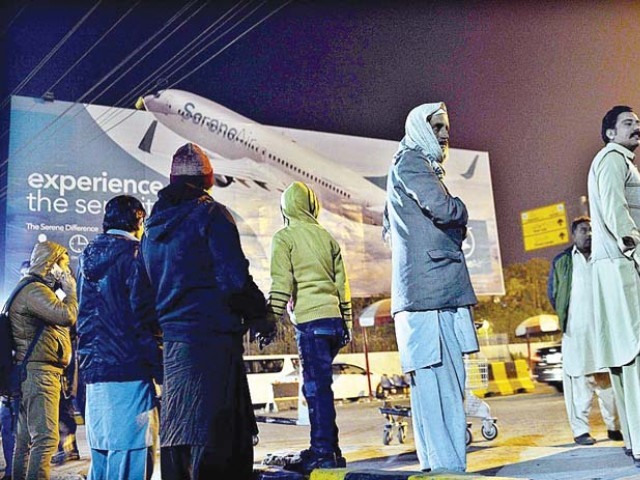 People stand outside the airport in Rawalpindi waiting for any news about their relatives who perished in the air crash. PHOTO: APP

RAWALPINDI/ISLAMABAD: Chaotic scenes were witnessed outside Benazir Bhutto International Airport as panicked relatives of the deceased and regular passengers on other flights mixed in with  throngs of welcoming party members for Umrah and other incoming flights.

Members of the media were barred from entering the airport, while a massive traffic jam  developed outside on Airport Road. The situation on the road was exacerbated by strict checking at the entrance to the airport, as even people with tickets were fuming over the time it was taking to get through. People going to buy tickets also struggled.

Relevance of ATRs in modern fleet?

Arrangements made so far

After getting information that PK-661 had crashed in the hills near Havelian district, the authorities of PIA and Civil Aviation Authority (CAA) had set up information desks at BBIA to facilitate families of the passengers.

Talking to The Express Tribune, CAA Spokesperson Fariha Shah said that two desks had been set up and telephone helplines had been established to provide all required information to families of the victims.

She said that so far, the families of two passengers had approached the CAA desk at BBIA and they were properly guided and informed about the ongoing rescue operation at the crash site.

Meanwhile, PIA management had made arrangements for temporary accommodation in hotels for relatives of victims who might come to the twin cities. The management had obtained 40 rooms for the families of passengers as they would have to wait to receive the bodies.

Chaotic scenes were seen outside the airport, as a large number of media persons gathered after news of the crash broke. Meanwhile, incoming Umrah flights from Saudi Arabia meant that a large crowd of relatives and well-wishers of travellers had already gathered at the airport when relatives of the crash victims started to arrive.

The situation reminded of numerous unsuccessful efforts by the CAA to restrict the number of people that come to the airport to collect or greet friends and relatives, especially after religious pilgrimages.

Although PIA and the Civil Aviation Authority (CAA) had announced that they had set up helpdesks at the airport, grieving relatives complained that they were not being given any helpful information on the status of their victims, or even where to collect the bodies.

Qamar Mehmood’s cousin Mohammad Nauman, 24, was a board the crashed plane. Mehmood said the information desk would not offer up any useful information and simply told him to go to Ayub Medical Complex in Abbottabad, where the bodies are being taken. “I can’t just pick up and go to Abbottabad…I have been waiting here for almost three hours.”

With additional reporting by Vaqas Asghar in Karachi