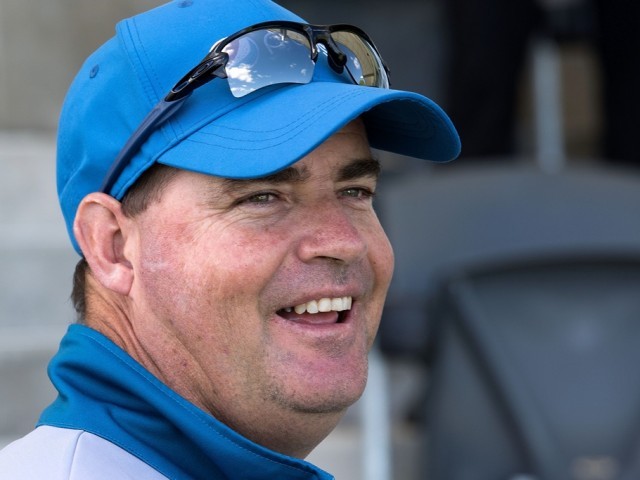 Mickey Arthur believes his side’s bowling will give them upper hand. PHOTO: AFP

Pakistan have never defeated Australia in a series Down Under and they will be seeing the three-match Test series starting on December 15 in Brisbane as their best opportunity to win their first one in 52 years.

The visitors have the best chance to do so with the hosts lacking stability after making drastic changes to their side recently during the series against South Africa.

Arthur believes that left-arm pacer Mohammad Amir will be a big name in the upcoming series. However, the 24-year-old has had a difficult stint since his return to national side after a five-year ban for spot-fixing.

“He [Amir] doesn’t have the pace of Mitchell Starc, but his control is very, very good and when he gets the ball to swing he’s as good as any going around,” said Arthur of the left-armer. “He’s quick enough as well, so he’ll be handful [in Australia].”

Pakistan’s pace attack will also derive from left-armers Wahab Riaz and Rahat Ali, with the former being notorious for his scintillating spell against Shane Watson in last year’s World Cup quarter-final.

Nevertheless, bowling is not the only thing Arthur is worried about as Pakistan’s campaign will heavily depend on their batsmen, who in the past have failed to handle the extra bounce in Australia. “Our attack is good enough to get 20 wickets, we just have to get enough runs and that’s something we’re working extremely hard at,” said Arthur.

The South African believes that Pakistan have the required skill level to topple the hosts and make history. “If we can master the conditions, which we’re working very hard at, and have belief to play well in these conditions we’re as good a chance as any,” he said. “We have wonderfully skilled players but they’re out of their comfort zone now, just like Australia are when they go to India.”

Mickey Arthur was quoted by The Age

Asad Shafiq hopeful of good results in Tests against Australia