Hailstorm, rain: Life disrupted in many areas of Balochistan

Hailstorm, rain: Life disrupted in many areas of Balochistan 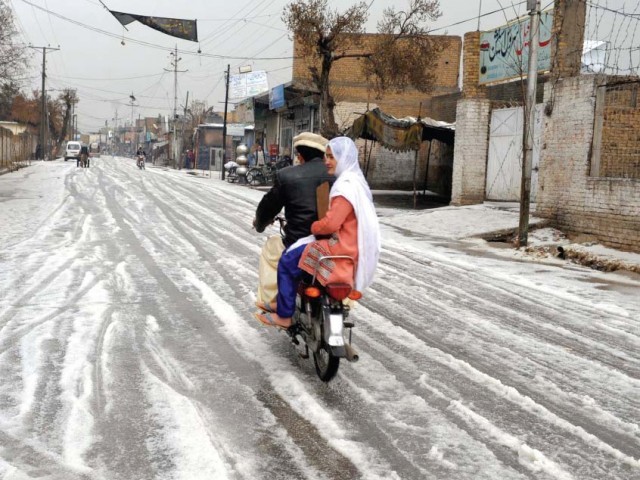 A view of a road in Quetta after the city recieved heavy rain accompanied by a hailstorm which disrupted life in many areas. PHOTO: EXPRESS

QUETTA: Heavy showers, accompanied by hail storms, lashed Quetta and other areas of Balochistan on Monday while a state of emergency was declared by the administration to cope with the resulting situation.

Low lying areas of the provincial capital were submerged while roads and streets overflowed by rain water paralyzing the routine life of people.

“This is a flood-like situation. All the storm water drains and sewage systems have stopped working due to heavy downpour,” Commissioner Quetta Division Naseem Lehri told The Express Tribune. He said that no loss of life has yet been reported in Quetta which, he said, received more than 25 millimetres of rain during the past 24 hours. Local administration lacked manpower, equipment and machinery to cope up with the situation hence an emergency was declared, he added.

Several mud houses were damaged following the prolonged hail storm. “More rain will cause a loss of property and life although we have already evacuated some residential areas,” Lehri said.

Heavy rains have also lashed Bolan and Chagai districts, disrupting the road link between Bolan and rest of the province. A massive traffic jam was reported on both sides of the National Highway in Bolan district after the only make-shift bridge connecting the district with the rest of the country was washed away. Landsliding near Mach also blocked the National Highway at Peer Gaza area of the district.