Her body was put on displa­y at a public hall in an open casket, wrappe­d in an India flag
By AFP
Published: December 6, 2016
Tweet Email 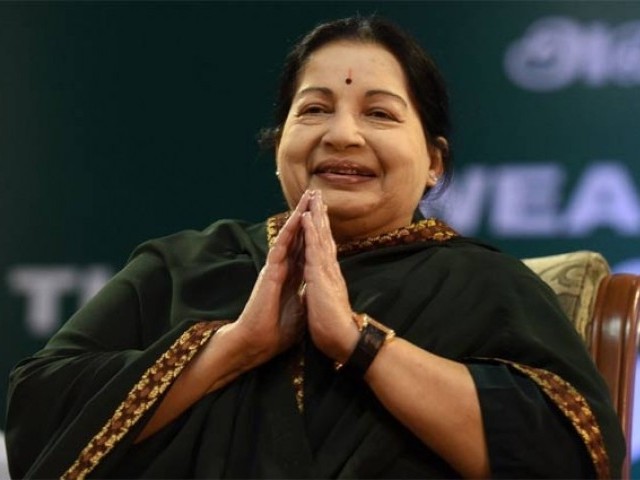 The 68-year-old former film star was known simply as Amma, or mother, in her native Tamil Nadu. PHOTO:AFP

CHENNAI, INDIA: Grief-stricken fans on Tuesday mourned the death of one of India’s most popular politicians, Jayalalithaa Jayaram, as fears of unrest loomed in her state where she enjoyed almost god-like status.

The 68-year-old former film star was known simply as Amma, or mother, in her native Tamil Nadu where she remained wildly popular despite allegations of corruption, which saw her briefly jailed twice.

Famed for a vast sari collection that won her comparisons with Imelda Marcos, Jayalalithaa was also one of India’s most polarising politicians, seen by some as an autocratic and secretive leader. 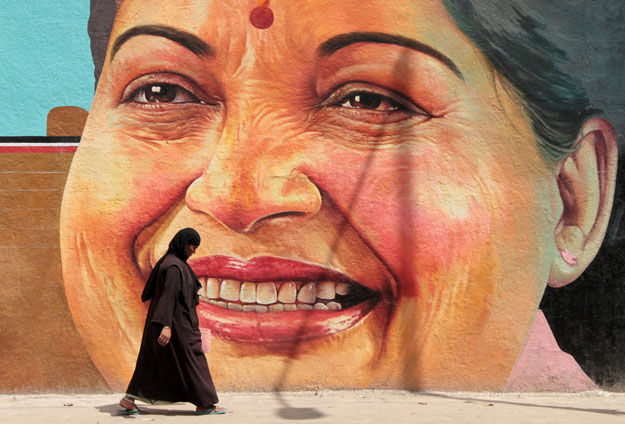 A woman walks past a portrait of J. Jayalalithaa, Chief Minister of the southern state of Tamil Nadu, in Chennai, India, March 13, 2012. PHOTO: REUTERS

But nothing could dent her popularity in Tamil Nadu, where she served three terms as chief minister during which it became one of India’s most prosperous states.

“Our beloved leader, the Iron lady of India… Amma, is no more,” her political party, AIADMK, said on Twitter.

Our beloved leader, The Iron Lady of India Puratchi Thalaivi Amma is no more.

Her body was put on display at a public hall in an open casket, wrapped in an India flag, as thousands of followers began to file past to pay their final respects from early morning.

Several of the mourners could be seen breaking down in tears as they filed past the coffin in the state capital Chennai, according to television images.

Hundreds of devotees had kept a round-the-clock vigil outside the private hospital in Chennai — the city formerly known as Madras – since she was first admitted in September suffering from a fever. 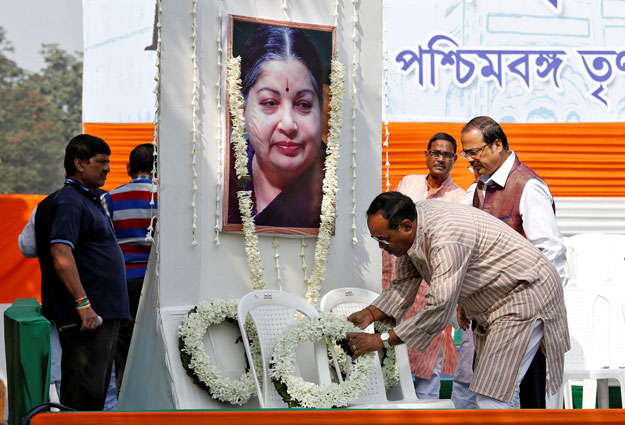 A man lays a wreath under a portrait of Jayalalithaa Jayaram, a powerful politician who died on Monday in Chennai, to pay his homage in Kolkata, India December 6, 2016. PHOTO: REUTERS

When she first fell ill one supporter set himself on fire, while an elderly man suspended himself from a crane with steel hooks pierced through his skin.

India’s Prime Minister Narendra Modi, who is to head to Chennai later in the day, offered his condolences.

“I will always cherish the innumerable occasions when I had the opportunity to interact with Jayalalithaa ji (honorific). May her soul rest in peace,” Modi said on Twitter.

The southern state had been tense since Sunday after reports that her health had worsened and she had been put on life support.

Earlier on Monday, scuffles broke out outside the hospital as many from the thousands of her supporters who had gathered outside tried to break through the police barricades.

Images on Indian news channels from across Chennai showed many men and women crying after her death was finally confirmed.

When her political mentor and former on-screen love interest M. G. Ramachandran died in 1987, riots and looting broke out across the state.

Ahead of Jayalalithaa’s death, police and security presence had been beefed up across Tamil Nadu over fears of chaos from her emotional followers.

Jayalalithaa had earned the loyalty of many voters with a series of populist schemes, including “Amma canteens” that provided lunch for just three rupees (five cents) and vast election-time giveaways that ranged from laptops to kitchen appliances.

Several of her supporters resorted to self-harm when she was briefly jailed in 2014 on charges of corruption.

Her conviction, later overturned on appeal, sparked mass protests and even some reported suicides.

Thousands of directors, actors and producers in the successful Tamil language film industry went on hunger strike to demand her release.

Jayalalithaa’s death has plunged one of India’s most economically powerful states into a period of political uncertainty.

Her trusted cabinet aide, O Panneerselvam, was sworn-in as the chief minister, but observers worry whether a loyalist, without real charisma or mass support, will be able to rule smoothly.

After midnight, thousands of people lined both sides of the roads in Chennai trying to catch a glimpse of the late leader as her body was taken from the hospital to her residence in another part of the city.