Witnes­ses claim exits were blocke­d and no fire exting­uishin­g system was in place
By Oonib Azam
Published: December 5, 2016
Tweet Email 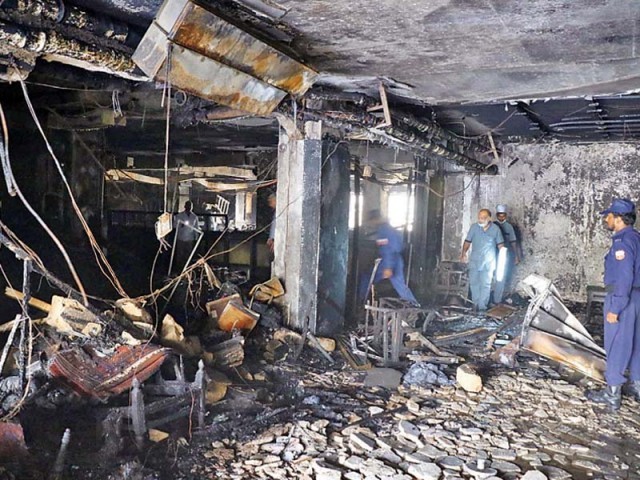 Even though the fire was put out soon, the smoke spread throughout the hotel, suffocating people. PHOTO: ONLINE

KARACHI: Havoc was rampant within the Regent Plaza Hotel on Sharae Faisal in the wee hours of Monday. The four-star hotel was stained black after a deadly blaze engulfed the ground floor of the eight-storey building while guests slumbered.

The performance of the city’s building control authorities came to light after the incident, which trapped around 600 guests — including foreigners — in their rooms with no fire extinguishing system or emergency exits functional.

The Karachi Building and Town Planning Regulations, 2002, mention necessary fire resistance and fire precautions for buildings, according to which all ground-plus-three buildings should have standpipes systems, sprinkler systems and proper exits.

Dr Syed Raza Gardezi, a member of Shehri — Citizens for a Better Environment, explained that, at the time of construction, the building control authority should examine the fire precautionary measures inside buildings. Once the building is constructed, he said, it becomes the responsibility of the chief fire officer to inspect the building.

Since there are several municipal bodies working in the city, the bylaws of the buildings are different, hence there is no chief fire officer for the entire city nor is there any single authority for building control.

The fire reportedly broke out in the hotel’s kitchen at around 2:30am and spread towards the first floor.  While the affectees of the inferno revealed that the fire extinguishing system and emergency exits were non-functional, the hotel management refuted this, claiming their fire and rescue system was fully functional.

From the outside it was visible that the glass panes of the hotel’s rooms were shattered, with bed-sheets hanging down, evidence of the desperation of the guests who, struggling for breath, attempted to climb out of the windows.

One of the guests, Jamal, said the exits were completely non-functional, as they were filled with smoke. When The Express Tribune visited the hotel, the smell of ash filled the air even outside the building. Windowpanes and frames were broken and the intense heat from the fire could be felt on the ground, even 12 hours after the incident.

Fire extinguishers were attached to the walls at the hotel’s Almas Restaurant, which was filled with the charred remains of sofas and carpets.

Inside the kitchen, where the fire originated according to Regent Plaza’s manager of admin and security, Major (retd) Muhammad Saad, some fire extinguishers were lying on the floor, indicating that they had been used to extinguish the fire.

According to Saad, the fire extinguishers were all functional, which is why they were able to put out the fire in time. Regarding the statements of people about the emergency exits, he said that in their fear and confusion, people have made such false statements, adding that their exits were fully functional.

The hotel, according to him, will remain closed for a week or two. However, he added, no alternative arrangement has been made for the guests as no guest requested it.

A fire officer of the Karachi Metropolitan Corporation (KMC) requesting anonymity said that there should have been three fire exits in the building while only one was functional, which was also engulfed in the fumes.

According to the officer, the fire was not huge and was put out soon but the major damage was caused due to the smoke. “I entered the building through the fire exit but was only able to reach the third floor as the entire fire exit passage was full of smoke,” he said, adding that they had to use their snorkel to rescue people.  The smoke, he said, kept circulating inside the building because the air conditioning system stayed on. Meanwhile, chief fire officer Tehseen Siddiqui said that, despite their requests, no one from the hotel management turned off the air conditioning and there was no exhaust system inside, due to which most people suffocated to death.

Karachi Mayor Wasim Akhtar said that the management of the hotel had not prepared any fire exits, due to which the rescue operation was affected. KMC’s senior director of municipal services, Masood Alam, said that even the hotel’s fire alarm system was out of order. He said the Karachi Cantonment Board should be answerable for the safety measures regarding fire inside the building as the hotel is situated in their jurisdiction. The Civil Defence, which issues certificates for the operation of such hotels, according to him, should be held responsible. For the rest of the hotels in the city, he said that the Sindh government has asked the respective districts’ deputy commissioners to carry out inspections.

Dreadful accounts: ‘There was smoke everywhere’