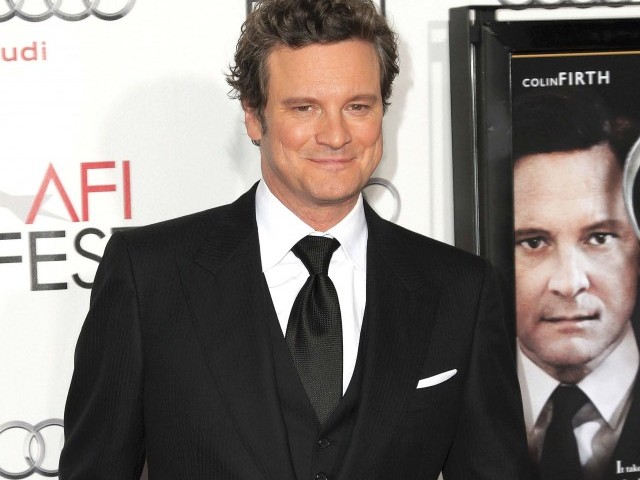 Colin Firth had a tough time playing the role of George VI in The King’s Speech. PHOTO: AFP

NEW DEHLI: If he were playing a cabbie, he would probably hang around with one. But British actor Colin Firth says since one can’t quite hang around with kings, he chose to rely on archival material and his screenplay writer instead to play the stammering monarch George VI in The King’s Speech.

“There aren’t any books on how to stammer. The best help I could possibly get was (screenplay writer) David Seidler,” Firth, who was crowned with the best actor award at BAFTA as well as the Golden Globes, told IANS in an e-mail interview from LA.

Director Tom Hooper brings on screen the story of King George VI’s impromptu ascension to the throne and his relationship with an unqualified speech therapist Lionel Logue (Geoffrey Rush) who helped the unsure monarch overcome the problem.

Firth stepped into a historical character for the first time and says he got enough material from archive footage and the speeches to prepare for the role.

“I paid a lot of attention to them, not to impersonate but to get what information I could about him (Bertie) and to somehow adapt that to what I was doing. If I were playing a cab driver, I’d probably want to hang out with a cab driver or drive a cab and see what it’s like. If I were playing an astronaut, I’d try to meet one. But you don’t get to meet kings and hang around with them. Your information is secondary,” he said.

He was also bowled over by the eloquence of screenplay writer David Seidler who had a speech problem himself.

“Had we not had David, I would probably have wanted to spend serious time with someone who could take me through what that was like. But he was the guy, because he had the problem, and he was extremely expressive about it. I was left quite shaken by some of his eloquence,” Firth said.

“If I remember, he compared it (the experience) to being under water. That there was this panicking, drowning sensation, which seemed to have no way out. Terrible, endless silence that you can’t climb out of. He also talked about how it conditions the way you approach your day, down to the last detail,” he added.

Firth has made a mark for himself with movies like Bridget Jones Diary and Bridget Jones: The Edge of Reason and the television series “Pride and Prejudice” – in all of which he played Mr Darcy, quite like the romantic character in Jane Austen’s novel.

So was The King’s Speech a conscious effort to get away from romantic roles?

“I do like to mix and match. I think romance and comedy has obviously found a way to go hand in hand in popular culture and I think if you get successful in one thing, it makes you employable enough. I think a lot of what we do is very random and on the outside, it is often assumed that everybody has some sort of strategy.

“I often read an analysis of an actor’s career and they talk about choices, in that they made bad choices for a while then good ones as if they were in a world of perfect choice. In fact, it is very odd. Just looking back over the last few things that I have done, I cannot see any pattern. Some of them worked out very badly and some of them worked out well, but there is no exact science.”

Firth, who will turn 51 this year, struck a chord with audiences through films like The English Patient, Love Actually, Shakespeare in Love, and Mamma Mia!.

The film is leading the Oscar race with 12 nominations, including best actor for Firth.

“It’s gratifying to get attention for a performance. I’m not going to wish any of it away, talk as big as you like. I welcome all of it,” he said.