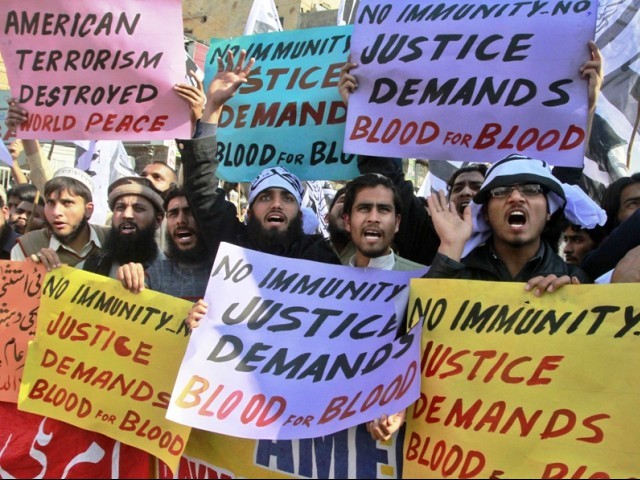 Supporters of religious parties hold placards as they shout slogans against Raymond Davis during a protest in Lahore February 21, 2011. PHOTO: REUTERS/FILE

Raymond Davis, the US national facing double murder charges, insisted he had diplomatic immunity and refused to receive a copy of the charge-sheet submitted in the court against him.

Additional District and Sessions judge Yousuf Aujla decided that charges will be framed against the accused on March 3.  US diplomats, including Consul-General in Lahore Carmela Conroy, observed the court proceedings in Kot-Lakhpat jail.

When the judge asked Davis if he wanted to say something, he said he had got nothing to say except that he had “diplomatic immunity”. He also submitted an application regarding the immunity, contending that the court, which was going to conduct his trial, was not authorised to do so.

When the court heard this, they summoned the state counsel and asked Davis to make sure his lawyer attended the next hearing so that the matter of immunity could be debated.

The trial took place amid tight security. Heavy contingents of law-enforcement agencies cordoned off the jail premises within a 300-metre wide perimeter.

The court proceedings took place in jail on the request of the Punjab home department which cited security concerns.

Local and international media was kept at bay from the venue.

According to the charge-sheet handed over to Davis, he opened fire from inside his car at Fahim and Faizan and then, after coming out of his vehicle, shot Faizan twice in his back.

Witnesses said the accused, after killing both pillion riders, took their pictures and called someone over a wireless set to get him.

The double murder trial is the first of two criminal cases in which Davis has been nominated.

On March 14, the Lahore High Court would decide the issue of Davis’ immunity.