NASA still making the most of 6,000-year-old amulet discovered in Pakistan

NASA still making the most of 6,000-year-old amulet discovered in Pakistan

The wood-wheel-shaped amulet is the first ever exampl­e of 'lost-wax castin­g' still in practi­ce
By Suhail Yusuf
Published: November 18, 2016
Tweet Email 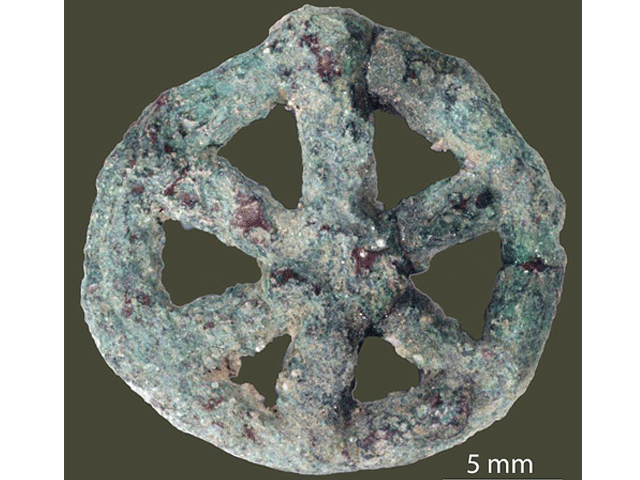 The image of the 6,000 years old amulet was discovered from Mehrgarh. PHOTO COURTESY: D. Bagault, C2RMF

KARACHI: A small amulet discovered from the ruins of Mehrgarh, an archaeological site in Balochistan, has been declared as the oldest known lost-wax cast object and its technology is still being used in the world, including by the National Aeronautics and Space Administration (Nasa), to manufacture different metallic objects.

According to a paper published in Nature Communications – a well-cited primary research journal – the wood-wheel-shaped amulet is the first ever example of “lost-wax casting” still in practice.

The imperfect shaped amulet looks green and rusty and was discovered in 1985 by Jean-François Jarrige, a French archaeologist who uncovered a Neolithic Mehrgarh site located near Sibi. But the discovery remained in the dark until it was shined by state-of-the-art lighting and imaging techniques.

By analysing the light bounce back from the 2cm-wide amulet, physicist Mathieu Thoury from the French Synchrotron, and his colleagues concluded that the object was carved in a single piece, adding that they did not find any soldering parts even at the joints of the rods. Scientists observed the emitting lights from the amulet shows it was made by pure copper melted at 1,085 degrees Centigrade.

Mehrgarh’s craftsmen used a simple but innovative way to mold the metals in their desired shape.

First they made a copy of the object with any material having low melting point, most probably a lump of beeswax; encased it in a soft clay to form a mold, which was then heated or baked to harden.

Finally, the molted metal, such as copper, was poured which melted the wax replaced the metal. After the cooling process and smashing the clay model, they got their once piece metal object.

This process is also called “investment casting” and is still used in making of delicate jewellery and small parts of space crafts.

Speaking to Express News, the key author of the paper, Mathieu Thoury, said: “It is a first discovery which shows the major metallurgy method of lost-wax cast and may have been adopted by other civilisations later on – such as Mesopotamia.”

According to the author, the amulet was carved from pure copper found in native areas.

Mehrgarh – the home of innovation

Mehrgarh was a remarkable site where according to some reports, first-ever dentists were found, and cotton was weaved for the first time.

In April 2006, a team of French scholars revealed that the Stone Age man used flint drills for boring teeth some 9,000 years ago.

French archaeologist Christophe Moulherat and his colleague analysed a total of 11 drilled teeth collected from a Mehrgarh graveyard.

In 2002, Moulherat discovered several threads preserved by mineralisation, which are the earliest known examples of cotton thread. The cotton fibres were preserved in copper beads and the study suggested that Mehrgarh was a home for textile making.

Sadly, much of the part of this important site has been destroyed due to tribal clashes.

A week of Waheed Murad movies