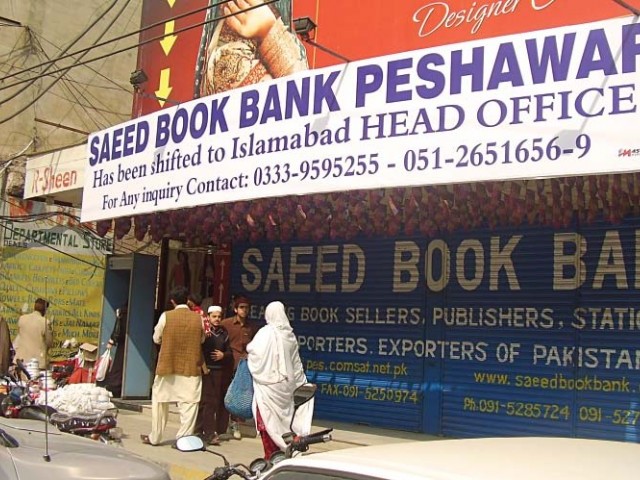 The sign outside the famous bookstore brings pain to the heart of any avid reader. PHOTO: MANZOOR ALI

PESHAWAR: A significant chapter in Peshwar’s literary history came to a close as the largest bookstore in the provincial metropolis shut down after over 40 years of operation.

The massive bookshop’s shutters have stayed down, with owners placing a banner notifying that the books will be shifted to their main store in Islamabad.

When contacted, Saeed Book Bank employee Manzoor Hussain told The Express Tribune that the shop had been closed for three days. The owner, Akbar Saeed, said lack of readership in Peshawar compelled him to shift his business to Islamabad.

“There is no reading culture in Peshawar and we mostly deal in foreign titles,” Akbar said. The family-owned business was established in 1955.

The closure of the shop came as a shock to avid readers.  Javed Khan, a resident of Peshawar termed the closure a setback for the city. “It is indeed sad news that the only bookshop where we had the luxury to browse through shelf upon shelf of fresh imported titles is gone.”

A spate of bombings in recent years had exhausted the city’s avenues for entertainment, with people often being wary of stepping outside their homes. The closing down of the oldest bookstore seems to be the final nail in the art of imagination in Peshawar.

“Where should I go if I need books? All the way to Islamabad to purchase a single title?” he rhetorically asked.

The bookstore’s section on Afghanistan and north-western Pakistan including the tribal areas was one of the most popular here and contained a mammoth number of titles, beginning with some of the earliest texts up to the most recently published.

“The last book I purchased from that section was a rare book, ‘The wind blows away our words’ by Noble Laureate Doris Lessing on her experience with the Afghani resistance,” Khan said.

The closure of the city’s largest book store came at a time when it is struggling to return to normalcy after devastating bombings in recent years that have taken hundreds of lives and rendered the city barren of culture.