Lehmann tells Australia to improve after batting collapse against Proteas

Lehmann tells Australia to improve after batting collapse against Proteas 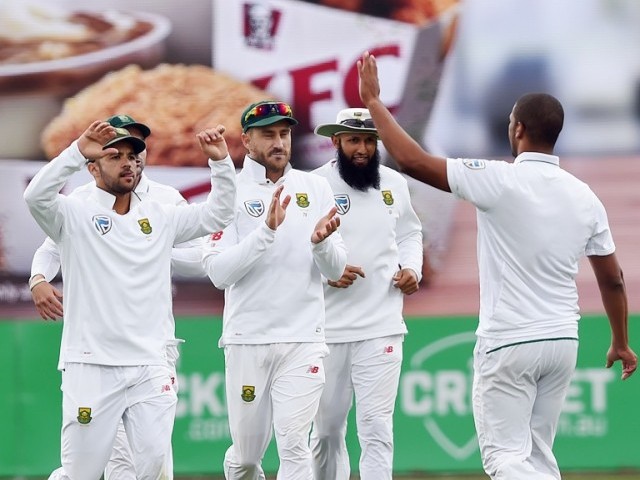 South Africa bowled Australia out for 85 in the first innings. PHOTO: AFP

HOBART: Australia coach Darren Lehmann said his team would have to improve their fragile batting against the swinging ball after reaching another crisis against South Africa in the second Test in Hobart on Saturday.

Australia suffered another one of their abject batting collapses in succumbing to the Proteas for just 85 off 32.5 overs, their lowest total at home against South Africa.

The tourists reached stumps at 171 for five and a lead of 86 runs after the first day.

The clatter of wickets again revived painful memories of recent catastrophic batting collapses which have plagued the team under Lehmann’s reign as coach.

'What on earth is going on here?' #ausvsa [Vid via Cricket Aus] pic.twitter.com/6HwKCb4Hiu

The capitulation revisited the nightmares of their miserable 47 in Cape Town in 2011 and England’s demolition of them for 60 at Trent Bridge last year.

“For us we have just got to be better. It’s a case of when the ball is swinging we struggle,” Lehmann told reporters after the opening day’s play.

“There is no hiding from the fact, so we have been doing everything behind the scenes to get better at it, but today we weren’t good at all.

“Steve Smith played really well for his unbeaten 48 and we needed someone to hang in with him.

“Obviously our lower order haven’t performed either but you can’t blame them, the batters have to do the batting.”

Lehmann insisted that Australia have the right squad amid criticism of the selectors over a losing run of four successive Tests this year.

“We believe this is best squad we’ve got to play, on today’s performance you would say we’ve got to change,” he said.

“But at the end of the day we’ve got to find a way to get through those tough periods and we haven’t done that in the last four and a half Test matches.

“That’s the challenge for not only the coaching group and myself but also the players to adapt to the situations that confront you.”

Steve Smith’s team have been under immense scrutiny after their emphatic 177-run loss to South Africa in the first Perth Test, and the latest batting collapse has only added to the mounting pressure on the players.

The Hobart rout followed Australia’s first innings collapse of 10 wickets for 86 in Perth when they squandered a 158-run opening stand to surrender meekly to the Proteas.

“Once we have a collapse we seem to have a big one and someone needs to stop that rot and have a partnership somewhere, that was disappointing,” Lehmann said.

“There is a lot of criticism and that’s warranted when you lose or when you play badly, and that’s fine.”

Here are the ten wickets